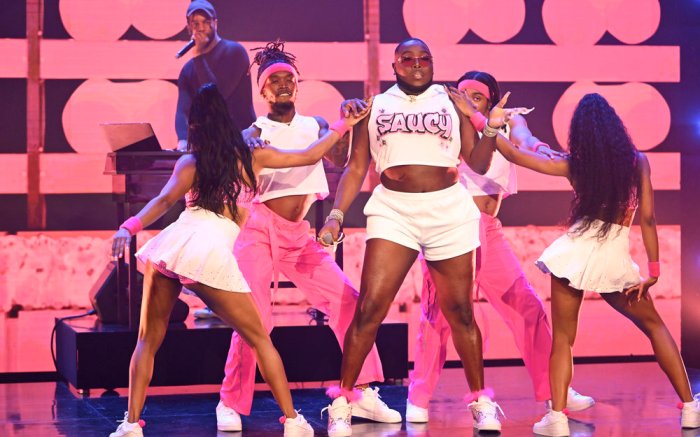 Saucy Santana made his late-night television debut on the “Tonight Show Starring Jimmy Fallon” on Thursday night. The chart-topping Florida rapper brought heat to the stage with a performance of his hit single, “Booty.” Santana put on quite the show as he was joined onstage with a DJ and group of dancers.

Santana blazed the stage in a white two-piece set, which consisted of a cropped sleeveless hoodie that was emblazoned with “Saucy” on the front in a pink graffiti font. He teamed his top with tiny boy shorts that had his song’s title on the back. For his accessories, as many rappers must do, he was covered in the finest of jewels.

From a gold necklace with a pendant hung over his hoodie’s front to  diamond wrist cuffs and pinky rings to emphasize his top and bottoms. To really give his look a Y2K feel, he also added clear pink sunglasses that had sparkling diamond accents on the side.

Santana continued to add eye-catching details to his look with pink socks that had a feather trim around the ankles, which brought more flavor and style to the sporty outfit.

The “Material Girl” musician finished off his look with a pair of Nike Air Force 1 sneakers that was customized with a pink graphic on each side of the shoe. The details matched with the bubble lettering seen throughout the artist’s outfit. The entertainer wore the lace-up sneakers untied, as the shoelaces were loosened so that the ends of the shoelace would neatly hang out.

Santana’s backup dancers had the regular but still trailblazing Air Force 1s with hot pink pom-pom accents on the side of their ankle socks.