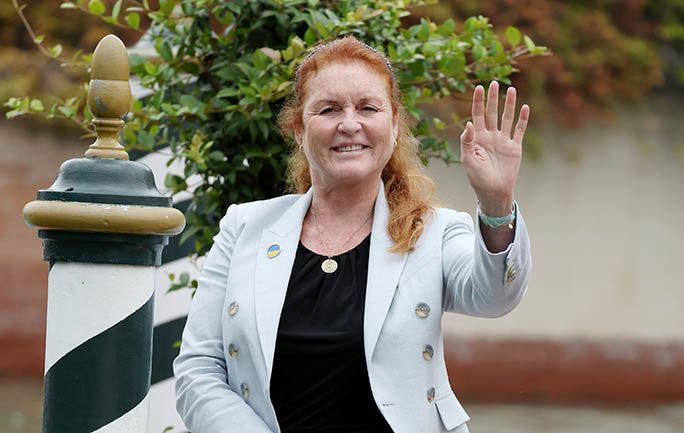 Sarah Ferguson put a sporty twist on a sophisticated style moment at the Hotel Excelsior during the 79th Venice International Film Festival on Sept. 8. The Duchess of York, who was married to Queen Elizabeth II’s second son, Prince Andrew, appeared in sleek fashion via boat.

Ferguson wore a pale blue blazer that was adorned with two-toned buttons and had sharp lapels and side slant pockets. She paired the piece with a black knee-length dress that included a round neckline and slightly ruffled hem.

The film producer held her hair back with a black headband and styled it in a loose ponytail. She accessorized with small cuff earrings and a thin gold pendant necklace.

When it came down to the shoes, the royal completed her look with black slip-on sneakers by Charlotte Olympia. The shoe style had featured an image of a cat on the toe and was set on a chunky white outsole.

Ferguson was married to Prince Andrew from 1986 to 1992. The couple has two daughters, the princesses Beatrice and Eugenie. Earlier this month, Ferguson attended the premiere of “The Son” at the Venice Film Festival.

The day turned into a somber mood as Queen Elizabeth passed away on Sept. 8. Buckingham Palace said that the Queen’s state funeral will take place on Sept. 19 at 11 a.m. The Queen will lie in state in Westminster Hall for four days to allow the public to pay their respects. The Queen’s Coffin will travel from Balmoral Castle to Edinburgh tomorrow to arrive at the Palace of Holyrood House, where it will rest until the afternoon of Sept. 12.