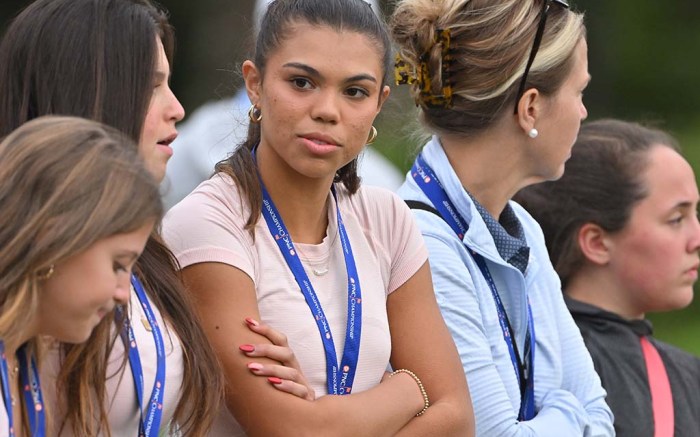 Sam Woods kept her look casual while in Orlando, Fla., over the weekend. The 15-year-old attended the 2022 PNC Championship to support dad Tiger Woods and younger brother Charlie Woods, who both played in the golf tournament.

On Saturday, Sam was spotted on the sidelines along the 15th hole, wearing a white miniskirt and pink t-shirt paired with white Converse sneakers.

The tournament, which took place from Thursday to Sunday, sees 20 major champion golfers team up with a member of their family. Players included the Woods family along with Vijay Singh and his son, Qass, and Justin and Mike Thomas. Jordan Spieth and his dad, Shawn, made their PNC debut, and defending champions John Daly and Little John Daly, Jr. also took part.

For Tiger, this marked his this third time competing alongside his 13-year-old son — having finished in seventh place in 2020 and second in 2021. This time around, the pair tied for eighth place.

This isn’t the first time Sam has supported her famous father. In March, she attended the World Gold Hall of Fame induction ceremony where she helped honor her dad as one of the inductees. For the emotional moment, Sam, wearing a red ruffled minidress and butterfly heels gave an emotional speech that brought tears to Tiger’s eyes.