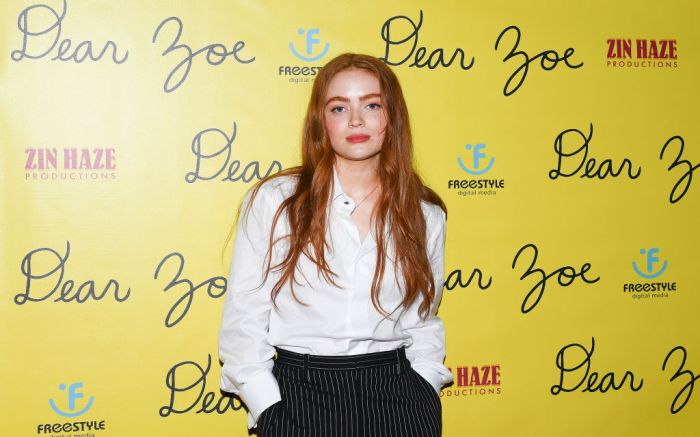 The “Stranger Things” star arrived on the red carpet in an ensemble comprising several staple pieces. She wore a white long-sleeve button-up top tucked into a pair of pinstripe slacks in navy blue.

Sink went with a minimal jewelry look, accessorizing in a single gold necklace. The actress wore her red hair in a style that curled at the ends and opted for auroral glam with rosy-hued blush and scarlet lipstick.

When it came to footwear, Sink went for a semi-hidden heel look. Her pants’ wide-leg design slightly revealed her shoe for the soiree, which appeared as a platformed boot style in a similar hue, coordinating with her bottoms.

This pump design couples well when choosing an outfit that gives an elevated appearance and is optimal for various flared pants styles, such as bell bottoms, high-waisted ones, or those similar to Sink’s. This shoe composition has become a footwear go-to for day-to-day and more formal wear and can accompany shorts and skirts. Its towering structure can also appear as part of combat and sneakered boots.

Sink has styled in similar platformed designs that coordinate and add an elevated flair to her looks before. On Sept. 5, she arrived in Italy for the Venice International Film Festival wearing a boater-chic outfit with peep-toe Gucci platforms in ivory. The following day, she attended “The Whale” premiere wearing black platform heels with a lavender Alexander McQueen gown.