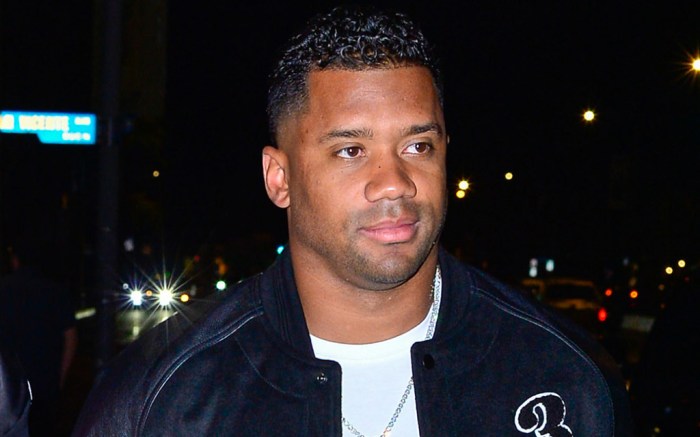 Russell Wilson suited up for Monday night football prior to the face-off between the Denver Broncos and Wilson’s former team, the Seattle Seahawks. While the game didn’t quite work out in his favor, the quarterback and his team losing to the Seahawks 16-17, Wilson still managed to look good before going down.

In a quick video posted to the Sports Illustrated Twitter, Wilson can be seen striding towards the camera, cooly modeling a colorful suit and shades. The fun formal wear consisted of a fitted blazer in a shiny teal shade thrown over a crisp white button down shirt.

The athlete wore matching tailored slacks, mastering monochrome dressing in no time at all. Wilson added a black bowtie, black and gold sunglasses with highly reflective lenses, and black headphones.

While Wilson’s shoes aren’t present, it’s safe to assume that based on his previous suiting ensembles, the 33-year-old is wearing some sort of sleek dress shoe with a shiny leather finish. When he’s off the field and far from the red carpet, Wilson often wears Nike sneakers featuring vibrant hues and patterns paired with dynamic and athletic silhouettes fit for almost any occasion. The father of two signed a long-term contract with Nike back in 2016. Since then, the husband of accomplished singer and songwriter Ciara has produced a signature line of apparel, accessories and shoes that are designed for expert wear wherever you go.

The nine-time Pro Bowl quarterback and former Super Bowl winner was offered a five-year, $245 million contract extension this month. Many are entrusting Wilson to restore the Broncos to contender status after six straight non-playoff seasons.