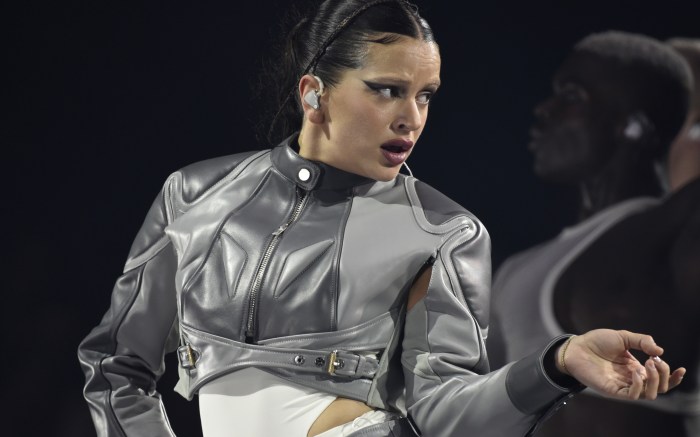 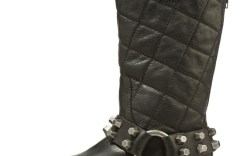 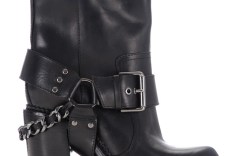 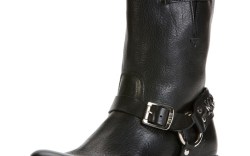 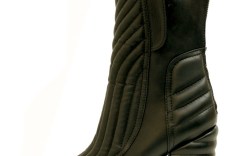 Rosalia added an eye-catching finish to her motocross outfit last night while performing at her Motomami World Tour in Bogotá, Columbia. In white thigh-high boots, the Spanish singer shared a sweet message about Colombian superstar Shakira on stage.

Rosalia strutted the stage in an all-gray leather ensemble. She wore a half zip cropped jacket featuring patches of two different shades of gray with buckles and zippers dispersed around the piece. The singer paired the look with a matching mini skirt.

Rosalia wore a white cutout short bodysuit underneath the co-ord. She slipped on thigh-high leather boots to complement the look. The piece featured a futuristic gray pattern with a chunky heel.

While on stage, Rosalia made a touching tribute to Shakira during her concert. “I got to say something. Since I was a little girl, I have loved this woman. I love her. She’s always been an inspiration for me. I’m gonna keep this with so much love,” she said after being surprised by one of her fans with a white t-shirt with Shakira’s name on it as a gift.

Rosalia has been on tour since early June performing her latest album ‘Motomami’. The singer is known for her edgy, futuristic style. She has mentioned Spanish actress and singer Lola Flores for her fashion inspiration. She is usually styled by Samantha Burkhart, who has worked with other notable stars like Katy Perry, Billie Eilish, and Christina Aguilera.