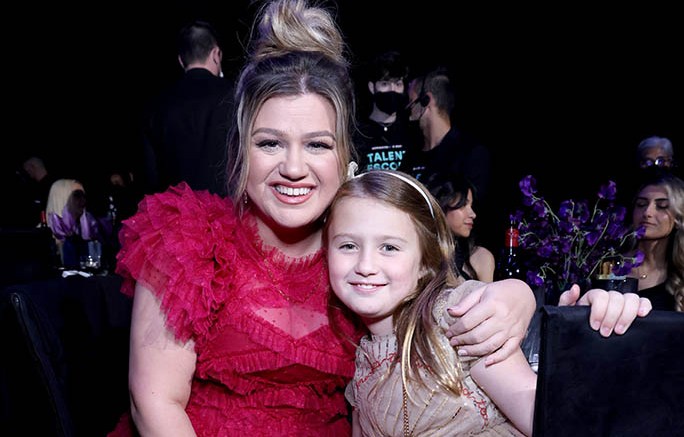 Kelly Clarkson and her daughter River Rose Blackstock had a mother-daughter date-night at the 2022 People’s Choice Awards on Dec. 6. The duo joined a slew of A-list stars at the Barker Hangar in Santa Monica, Calif.

River Rose served as her mother’s plus one at the annual ceremony. Her young brother Remington Alexander Blackstock was not in attendance. River Rose looked adorable for the evening out. The 8-year-old made a sparkling appearance in a beige Gucci dress. The piece had short puffy sleeves and was decorated with sequin rainbow accents throughout. The garment was also embossed with Gucci near the hem.

River Rose complemented her outfit with white streamlined stockings. For accessories, she covered her hair with a satin headband and carried her essentials in a small pink crossbody bag.

Completing River Rose’s look was a pair of ballet flats. The shoe style had a thin strap across the instep and a square tan heel.

Clarkson wore a red gown that featured a zig-zag ruffled look. The vibrant dress was made up of a polka-dot mesh material. The daytime talk show host’s footwear was hidden by her ruffled gown. She admitted that she eschewed a pair of heels for the event — joking that at 5-foot-3 she struggled to reach the microphone without height-boosting footwear.

The singer received the award for The Daytime Talk Show of 2022 for her namesake program.