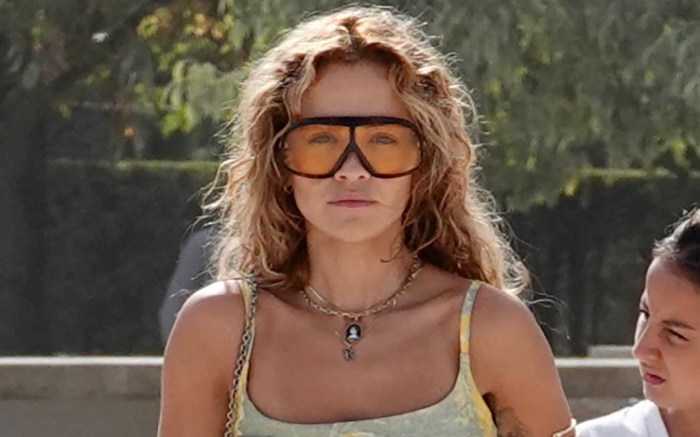 Rita Ora gave fans a sneak peek into her at home life on TikTok today.

The video posted shows the singer dancing her heart out. Ora flipped her hair and moved her hips to Beyoncé’s song “Alien Superstar” off of her chart-topping album “Renaissance.” The caption on the post read, “Literally when no one is watching and Beyoncé comes on.”

Literally when no one is watching and Beyoncé comes on. #fyp #foryoupage❤️❤️

Even if the “Poison” songstress was home alone dancing in her living room, Ora still managed to pull a fashion-forward look. It all began with a maroon and yellow maxi dress with thick shoulder straps and a risky print featuring a nude female form. With the eye-catching dress came a maximalist approach to jewelry, Ora donning silver bracelets one after another, the star also stacking her silver and turquoise necklaces.

Ora also wore chunky statement rings that took up much of her fingers in bright purples and reflective silver. The singer wore her hair down in natural tight ringlet curls with loads of volume making the style perfect for some dramatic hair flipping.

Although Ora’s shoes weren’t in frame, the songstress can be seen in a few favorites. When it comes to shoes, Ora’s styles are varied. The “For You” singer often opts for on-trend styles. Most recently, she’s worn ankle-wrap sandals, buckled pumps and thong heels from brands like Versace, Kat Maconie, Roger Vivier and Miu Miu, among others. Ora’s a mainstay in the fashion industry, having starred in campaigns for Donna Karan, Roberto Cavalli and Escada over the years. The musician has collaborated on past fashion lines with Adidas Originals and Tezenis, as well as a shoe capsule with Giuseppe Zanotti. She’s also been a longtime partner of ShoeDazzle, creating several collections for the budget-friendly brand that all retail for under $100 on ShoeDazzle.com.