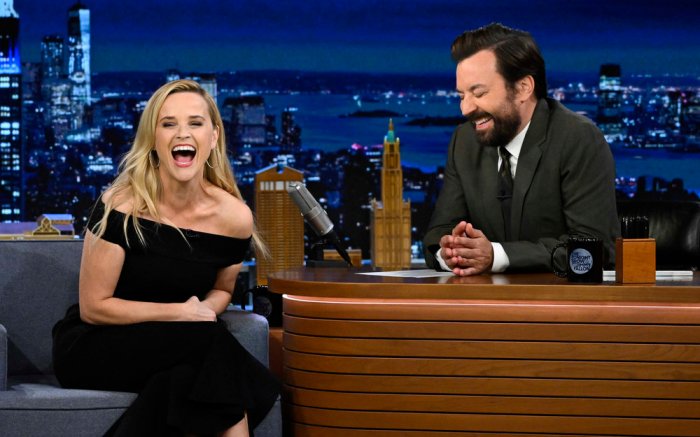 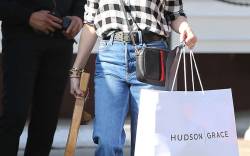 The NYT bestselling author kept things classy with a black Alexander McQueen off-shoulder midi dress, that featured a fishtail hemline. For some added southern charm, Witherspoon fixed an Alexander McQueen military belt at the waist, shaping her silhouette. The wide belt accessory is being adapted in a variety of ways by style icons and celebrities like Bella Hadid, who opted for a southern and Y2K twist on the accessory with the belt being built-in to a midi-length denim skirt.

Witherspoon added some shine to her outfit with thin rhinestone silver hoops and silver rings. Her make-up was simple with a pink lip and a hint of smoky eye shadow. She wore her blond hair down with waves.

For footwear, the founder of the clothing line Draper James slipped into a staple pair of Louboutin “Hot Chick” slingback stilettos. The pumps featured a pointed toe and a curved slingback. Witherspoon opted for the same shoe but in a lilac color for one of her other appearances in NYC.

Actress Reese Witherspoon and host Jimmy Fallon during “What’s Behind Me.”

Witherspoon and Fallen kept things light and shared lots of laughs playing “What’s Behind Me?” and participating in TikTok trends. They discussed the author’s new children’s book, “Busy Betty,” which hit the shelves of Target, Walmart, Barnes & Noble and Amazon on Oct. 4.