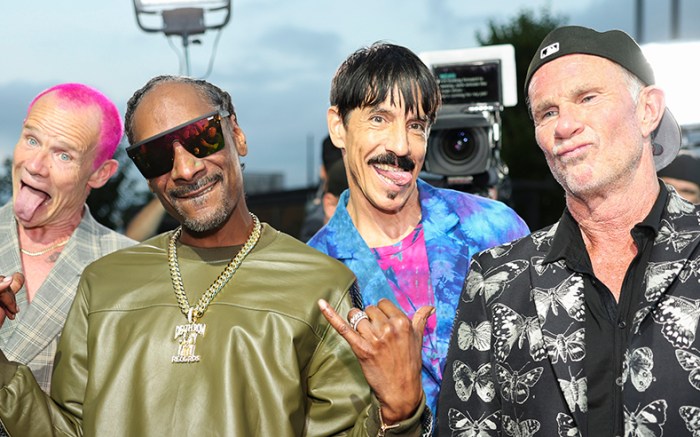 After giving two memorable performances dressed in grungy outfits, the Red Hot Chili Peppers received the award for Global Icon at the 2022 MTV VMAs on Sunday in Newark, NJ. Each member gave heartfelt and emotional speeches.

The bassist of the band Flea was clad in a black maxi skirt and bright purple socks, which he paired with black and white athletic sneakers. His edgy ensemble was completed with a buzzed head dyed vibrantly in pink and green. Lead vocalist Anthony Kiedis  wore a red mesh tee with black and yellow lightning bolt shorts. Kiedis’ onstage outfit was also completed with bright socks and black sneakers.

Following up his bandmates, drummer Chad Smith donned a white sleeveless jumpsuit and a black baseball cap which he paired with red sneakers and matching sweatbands. Finally, guitarist John Frusciante dressed in spray painted slacks and a red and black long-sleeve flannel. Much like his bandmates, Frusciante also wore athletic sneakers in black and red.

The Global Icon Award “celebrates an artist or band whose unparalleled career, continued impact, and influence have maintained a unique level of global success in music and beyond, leaving an indelible mark on the music landscape.” Foo Fighters were the recipients of the coveted title at the 2021 awards.

PHOTOS: See what other celebrities wore on the red carpet for the 2022 MTV VMAs.