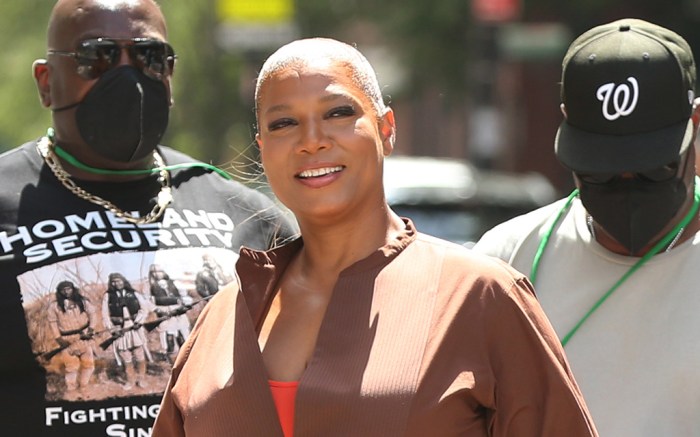 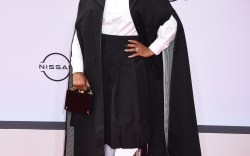 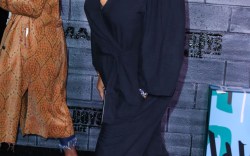 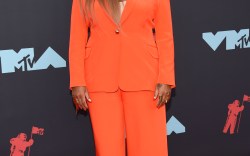 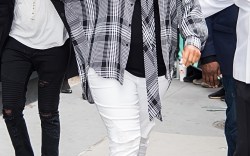 Queen Latifah is on-set and ready to go in style. While filming her CBS hit show “The Equalizer” with Tory Kittles and Liza Lapira in New York, the actress filmed scenes in a relatable, down-to-earth look that reflects part of her own off-camera distinct style.

The musician had on an unstructured summery jacket that tied at the waist, light enough for the warm weather yet provided a more finished touch to a laid-back, everyday look. The loose tie belt gave a sense of fun while allowing flexibility to its styling. It can be left open for an extra-relaxed feel or tied like Latifah had for a more composed appearance.

She wore the jacket over a red-orange tank top that popped in color and enlivened the jacket’s brown tone. Latifah coordinated with a pair of dark-wash denim jeans.

Her footwear embraced a similar palette that also blended with her top and jacket. Its colorway followed a darker-hued brown accentuated with bright orange detailing on the sneakers’ vamp. Tinges of blue and cream appear as part of the sneaker’s eyelet and toe cap. Her shoe choice allowed for practical yet stylish wear while she working on the set of her show.

The Oscar-nominee was joined by Liza Lapira, who had on heeled combat boots.

Latifah’s style is always authentic whether she’s producing, gracing the red carpet, starring in a movie, or hosting a talk show. She effortlessly blends her wardrobe with any occasion while remaining true to herself.