Queen Latifah Keeps it Casual in Hoodie, White Jeans and Sneakers While Cheering at US Open 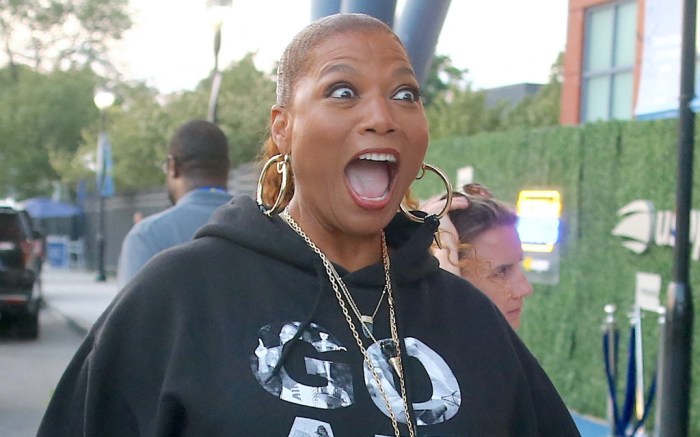 Queen Latifah showed her support for Serena Williams at the athlete’s last US Open.

The rapper and actress hit the tennis tournament on Monday in NYC to watch Williams’ match against Danka Kovinic. To the event, Latifah went with a black hooded sweatshirt with “GOAT” written across it. Each letter featured a different black and white photo of Williams. She paired the hoodie with white skinny jeans.

Latifah accessorized with lots of gold jewelry including large hoop earrings and many layered necklaces.

The producer completed her look with a pair of cool sneakers. She wore black kicks with white laces, neon green fabric covering the heels, and bright pink midsoles. The sneakers popped against the black and white outfit.

When it comes to fashion, Latifah has a personal aesthetic unlike no other. Her wardrobe has evolved from Adidas tracksuits to chic, evening gowns and tailored separates. For footwear, the multi-hyphenate favors various footwear styles like pointed-toe pumps, metallic sandals and trendy sneakers.

The U.S. Open is the final 2022 Grand Slam tennis tournament, held at the Billie Jean King National Tennis Center in New York City. Running from Aug. 29 to Sept. 11, the tournament will air on ESPN, ESPN2 and ESPN Plus. 128 players will be competing in this year’s competition, including Serena Williams, Daniil Medvedev, Rafael Nadal, Iga Swiatek and Anett Kontaveit. The event also draws a range of celebrity guests; so far, this year’s has included Rebel Wilson, Lindsey Vonn, Hugh Jackman and Bella Hadid in addition to Queen Latifah.