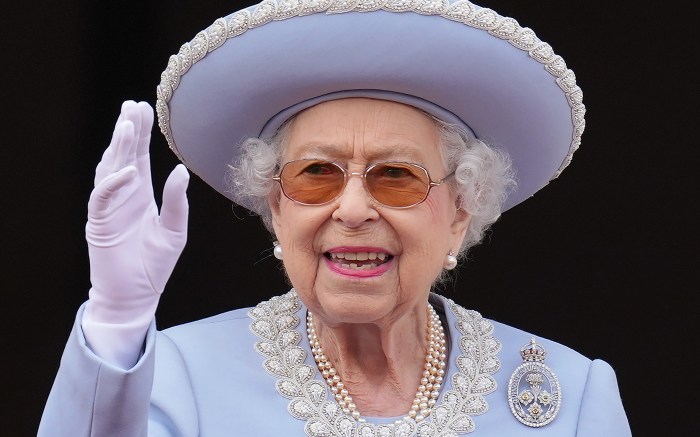 Queen Elizabeth II still knows how to have fun, and she proved it Saturday night with a special skit in honor of her Jubilee Concert Party at the Palace.

Pairing up with the beloved children’s character Paddington the bear, Her Majesty filmed the video skit ahead of the celebratory night. Sitting down at a table with the children’s book character, she was shown drinking tea and sharing the bear’s favorite marmalade sandwiches. In conversation, Paddington praised Elizabeth for all she had done for the country, congratulating her on her Jubilee.

For tea, the Queen wore a yellow and blue floral dress with a modest neckline, long sleeves and a comfortable fit. The royal made the most of her collection of important antique jewelry, accessorizing the dress with stacked pearls, a sparkling diamond broach, and simple pearl earrings. The Queen also carried a black leather bag with a gold clutch where she kept her marmalade sandwich for later.

Queen Elizabeth II has always favored a modest but refined style of dress, opting for classic silhouettes but choosing bright colors to make her sartorial statement. Whether it’s her own Jubilee or a royal affair, the royal knowns what works for her and often chooses one singular color for her entire ensemble, matching her hat to her shoes and gloves and everything in between. While the Queen seems to prefer a comfortable flat, she has on special occasions opted for a sensible heel.

The royal’s floral dress in the video proves that the 96-year-old monarch still knows how to take a fashion risk and look elegant while doing it.

The video ends with the pair being called to the concert with the sound of cheering fans.

Click through the gallery to see some of the looks from Queen Elizabeth II’s Platinum Jubilee Concert.