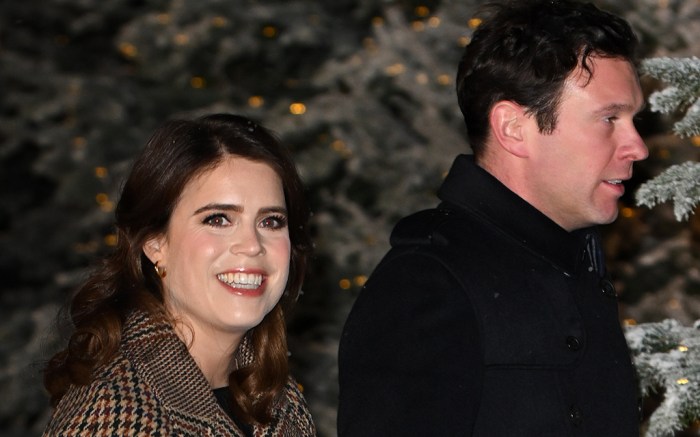 Princess Eugenie and her husband Jack Brooksbank attend the “Together at Christmas” carol service at Westminster Abbey tonight in London. The daughter of Prince Andrew was all bundled up, fighting off the cold along with her spouse dressed in a cozy trench coat and classic black boots.

Keeping warm, Eugenie’s look was comprised of a black dress layered underneath an oversized houndstooth trench coat with black buttons a fringy hem. The $1,245 coat is from Weekend Max Mara.

The princess carried a black clutch with a silver clasp and wore her hair down in loose curls, the simple style framing her face.

Brooksbank was cozied up in a black collared button-down coat. Peeking past the all-black outerwear, the English bar manager wore a crisp white collared shirt with a red tie. Brooksbank finished off his formal ensemble with black slacks. Eugenie’s husband wore sleek black dress shoes with a glossy finish.

As for footwear, Eugenie stepped out in black pointed-toe knee-high boots fitted with stiletto heels, around 3 to 4 inches, and a sleek textural suede silhouette.

Princess Eugenie often opts for classic and versatile styles in her vast shoe wardrobe. For formal occasions, the royal can be spotted in pointed-toe pumps by Gianvito Rossi, Jimmy Choo, Carvela and Givenchy, among other top brands. She’s also been seen during conference events in slipper-style loafers by Charlotte Olympia.