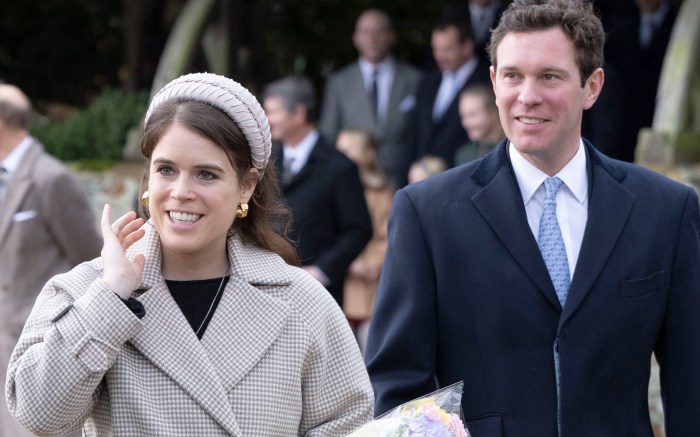 The princess wore a black crewneck long-sleeve top underneath a light beige and white houndstooth wool coat. She accessorized with a silver-toned necklace and gold-toned hoops. She added a thick light beige ruched headband to match her lengthy coat.

The princess kept her dark brown hair in a softly waved style slicked back behind her headband bringing attention to her subtle makeup that featured a bare lip.

Eugenie completed the look with a pair of black boots. The leather shoes featured a ruched sleeve with an almond toe. The back of the boots was hidden from the angle, but she is most likely sporting a block heel.

Her husband also opted for a classic look. Brooksbank wore a white button-up dress shirt with a blue patterned tie. He layered up with a dark blue blazer coat that stopped right in the middle of his black trousers. Brooksbank completed the look with a pair of black patent leather oxford shoes that featured an almond toe and a lace-up closure.

Princess Eugenie was also spotted wearing a similar chic look to Kate Middleton’s “Together At Christmas” concert at Westminster Abbey a couple of weeks ago. The princess wore an oversized Max Mara houndstooth trench coat with black pointed-toe knee-high boots for the occasion.

When it comes to footwear, the royal often slips into chic versatile styles. For formal occasions, Princess Eugenie gravitates towards pointed-toe pumps from a variety of designer labels like Gianvito Rossi, Jimmy Choo, and Givenchy. She often elevates her looks with dramatic headpieces and other accessories like the symbolic veiled headband she wore to a floral tribute for Queen Elizabeth back in September.