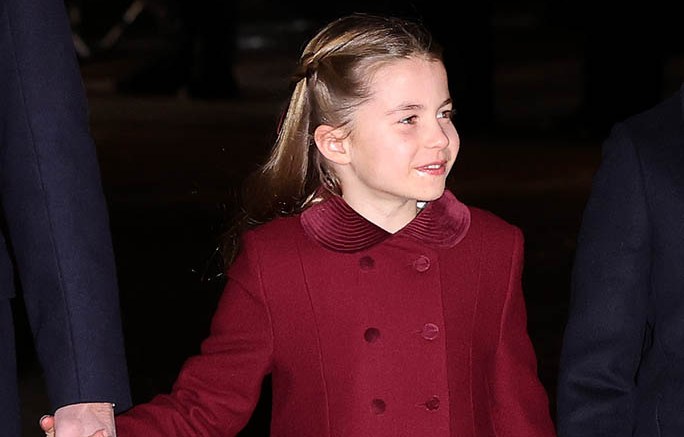 Princess Charlotte matched her mother Kate Middleton, Princess of Wales while attending the “Together at Christmas” carol service in London on Dec. 15. The event, held at Westminster Abbey is a holiday special that the royal family members take part in, including her father Prince William and brother Prince George as well as, Camilla, Queen Consort and King Charles III.

For the festive occasion, Charlotte coordinated her ensemble with Middleton’s. The 7-year-old royal arrived at the affair in a burgundy trench coat dress. The piece featured a velvet-layered collar, side slant pockets, streamlined buttons at the center and a slight flare on the hem. Charlotte complemented the garment with navy blue tights.

When it came down to the shoes, Charlotte completed her look with patent leather ballet flats. The shoe style had a round toe and thin strap that ran along the instep.

Kate wore a similar coat to her daughter’s.  The princess donned a coat dress with a wrapped silhouette, long sleeves and a calf-length hem. The piece was paired with a matching glossy reptilian textured clutch, as well as sparkling vertical ruby and diamond drop earrings.