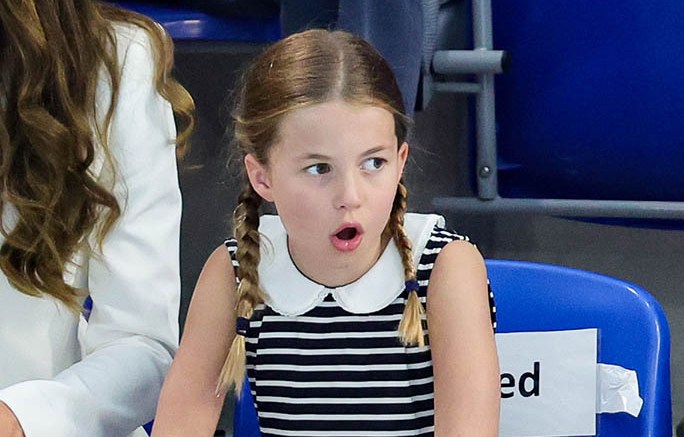 Prince William and Kate Middleton attended the 2022 Commonwealth Games on Tuesday, bringing along Princess Charlotte on the royal outing. The Duke and Duchess of Cambridge were photographed alongside their daughter enjoying the festivities while sitting in the stands of Sandwell Aquatics Centre. The trio watched the swimming heats at the facility in Birmingham, England.

The royals will also attend events and engagements in celebration of the Games, such as the opening and closing ceremonies, and pre-ceremony receptions. The occasion marked the first time that Charlotte has joined her parents for a solo outing without her older brother Prince George and younger brother Prince Louis.

Charlotte looked adorable for the family outing. The 7-year-old wore a striped dress by Rachel Riley. The versatile piece is an essential to any little girl’s summer wardrobe, in soft jersey with a classic navy and ivory Breton stripe.

The contrast white collar with lace trimmed edge adds a little something special to this comfy day dress.

She styled her hair in two braids and held them together with two navy ties. The young royal completed her look with white La Coqueta Siena Sandals. Retailing for $67, the slip-on style features supple leather straps and a comfortable rubber sole.

Charlotte appeared to channel her mother, who opted for the same color choice while visiting the Great Britain SailGP Team in the United Kingdom in July. The Duchess of Cambridge stepped out in a nautical outfit that consisted of a blue and white striped sweater from Erdern, which she paired with white shorts and sneakers.

PHOTOS: See some of Kate Middleton’s best shoe style moments over the years.