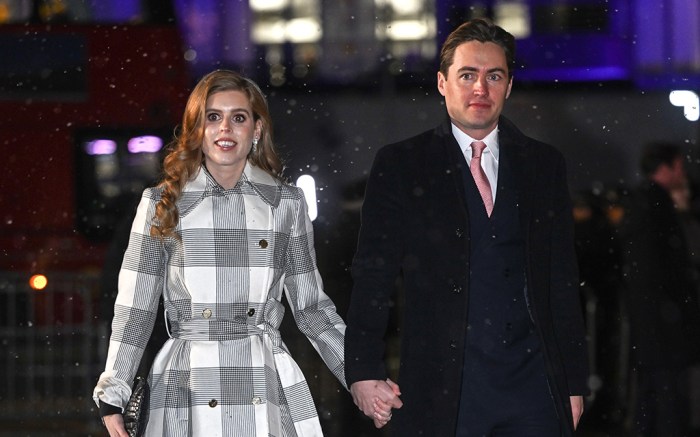 Princess Beatrice brought plaid style to the “Together at Christmas” carol service at Westminster Abbey tonight in London. The royal member arrived at the event alongside her husband Edoardo Mapelli Mozzi.

Wrapped in elegance, Beatrice bundled up in a chic trench coat and black suede boots.

Beatrice’s winter-ready outfit consisted of a grey and white coat fastened with shiny gold asymmetrical buttons all down the front. The royal carried a faux-crocodile embossed clutch and wore her hair down in curls.

As for footwear, Beatrice opted for black suede pointed-toe boots of what appeared to be the knee-high variety. The cold weather footwear was fitted with stiletto heels, around 2 to 3 inches, and a sleek textural suede silhouette.

To adhere to royal rules, the princess usually opts for sophisticated looks. She is often seen in closed-toe heels or boots. She loves to wear pastel hues and classic polka dot prints with her midi dresses. Princess Beatrice will sometimes slip into a stylish pair of flats for an occasion. The princess loves to accessorize with hats and various styles of purses.

For special occasions like royal weddings, Princess Beatrice is known for wearing over-the-top hats and fierce heels. She was seen pairing a soft pink collared dress with a towering structured headpiece to Prince William and Kate Middleton’s wedding in 2011.