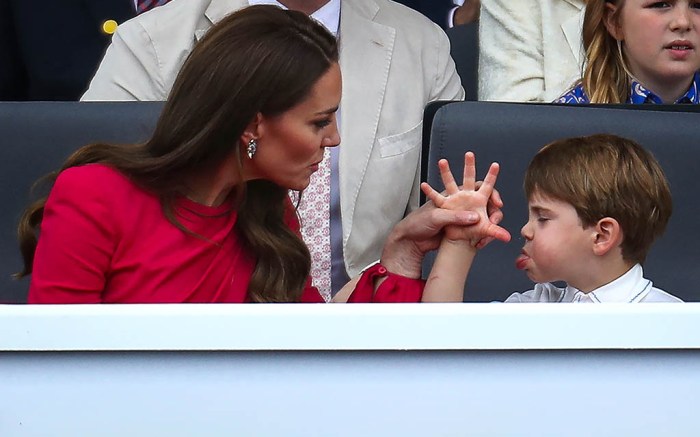 Prince Louis isn’t impressed with all the pomp and circumstance surrounding Queen Elizabeth’s Platinum Jubilee. After a full long weekend of festivities celebrating his great-grandmother’s unprecedented 70-year reign, the 4-year-old son of Prince William and Kate Middleton had enough, stealing the show (again) at the Platinum Jubilee Pageant.

During the parade, which marked the final day of Jubilee festivities, Prince Louis was seen making funny faces at his mother to express his frustration at being forced to sit still and watch. The young royal stuck out his tongue at one point, putting his thumb on his nose with his other fingers extended.

Prince Louis was also seen wiggling around restlessly in his seat, once attempting to use his sister Princess Charlotte as a footstool (she wasn’t having it). He was also seen participating in other age-appropriate antics, like covering his mother’s mouth as she attempted to curb his behavior. Eventually, the young prince was sent over to his grandfather Prince Charles for some quality time on his lap, which seemed to help Prince Louis calm his frustrations. But it wasn’t all hum and drum for Prince Louis during the pageant. At some points, the 4-year-old was seen dancing, pumping his fists in the air, and standing on his seat to get a better view of the show. This isn’t the first time the tiny royal has gone viral during Jubilee Weekend. On the first day of festivities, Prince Louis wasn’t too thrilled with a boisterous military fly-past during the annual Trooping of Colour, leading the 4-year-old to cover his ears and scream to drown out the sound. The internet quickly fell in love with the adorable young royal’s age-appropriate reaction which proved kids will always be kids — even if they are in line to the throne.

The Queen’s Platinum Jubilee celebrated Queen Elizabeth II’s unprecedented 70-year reign over the United Kingdom and associated Commonwealths. The Queen is the first British Monarch to achieve a Platinum Jubilee following seven decades of service to the throne, longer than any other British royal in history. The Platinum Jubilee, which ran from June 2 to June 5, was a four-day bank holiday that included celebrations all over the U.K., including parades, performances, and other public gatherings.