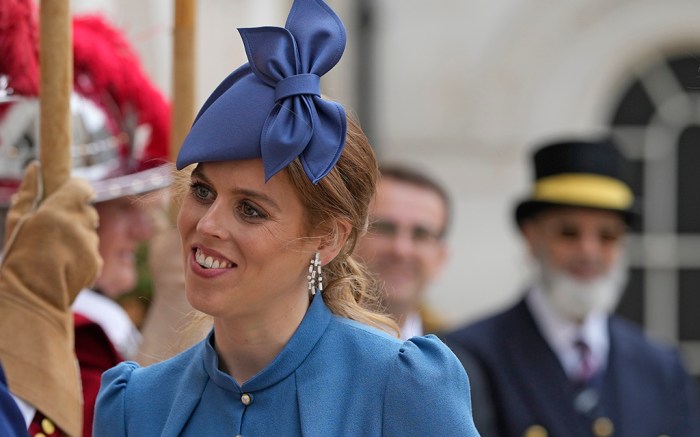 Princess Beatrice was spotted at St. Paul’s Cathedral in London today to attend the National Service of Thanksgiving. Queen Elizabeth’s family has gathered for a special service as a part of the weekend-long festivities in honor of the monarch’s 70-year reign.

In her all-blue ensemble, Princess Beatrice made waves as the color made her stand out immensely— the warmth of this blue bringing a different dynamic to the event.

Princess Beatrice wore a maxi royal blue long-sleeve dress with a sophisticated mock neck that was enclosed by white buttons. The garment sinched around her waist by a blue belt, as the rest of the fabric flared, circling around her ankles. The way the garment was constructed held small but very sufficient details as the front of the dress had two pleats that brought a more picturesque look. Along with the slightly puffed shoulders, that enwrapped into the sleeve, buttons gracing the sides. All around it was a dress that spoke volumes with very quaint details.

For Princess Beatrice’s accessories, she wore a bowed headpiece that contrasted her honey-brown ponytail — two colors that worked well together. The princess’ headpiece was slightly darker blue than her dress, which was another great choice to embolden this overall look. For jewelry, the princess decided on diamond earrings and left her wrists bare as more simplistic choices for jewelry would be better to spotlight such a wonder of a dress.

For shoes, she wore a pointy-toe pump in the color of a gray with suede material. These pumps worked efficiently with the dress as well because it emphasizes the chosen color palette, keeping everything oceanic.