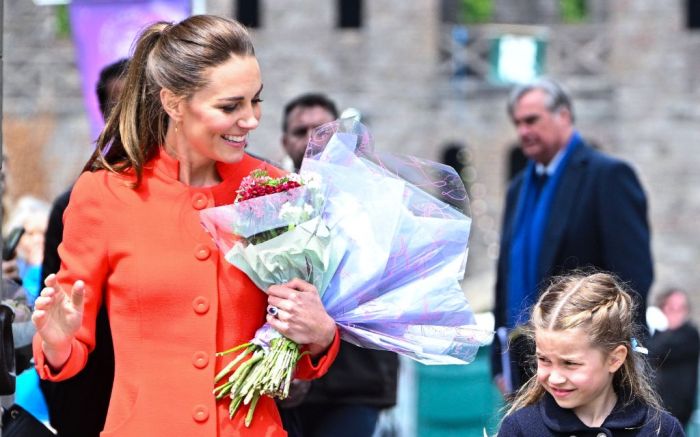 Kate Middleton looked elegant and cheerful in a bright ensemble for a surprise visit to Wales on Saturday in celebration of the Queen, with husband Prince William and children George and Charlotte in tow.

With the rest of the family matching in sophisticated and smart navy blue, Middleton took the spotlight in a red-orange button down coat. The garment featured a mock neck collar, which she wore upright, and a long line of buttons, creating a sleek silhouette. Inside the coat, a navy blue lining matched the Duchess’s dark blue dress, which coordinated with her family’s celebratory look.

Subtle with accessories, Middleton wore a pair of gold medium-sized rectangular hoops and put her hair in a low-back ponytail, which emphasized the formality of the event. The bright color added a whimsical touch to the celebratory day. The Duchess’s sapphire and diamond engagement ring from Prince William — which famously belonged to Princess Diana and was passed down for the couple’s nuptials — was also an elegant and subtle match to the navy accents of her ensemble and her family’s.

True to her signature style, Middleton cleverly matched her accessories, sporting a pair of navy pumps to coordinate with her dress, coat lining and her family’s ensembles. The pointy-toe heel rounded out the formal wear with style, showing both versatility and instant sophistication. The style is perfect for both a night out or as the punctuation to a sophisticated and elite event such as the Platinum Jubilee Thanksgiving.