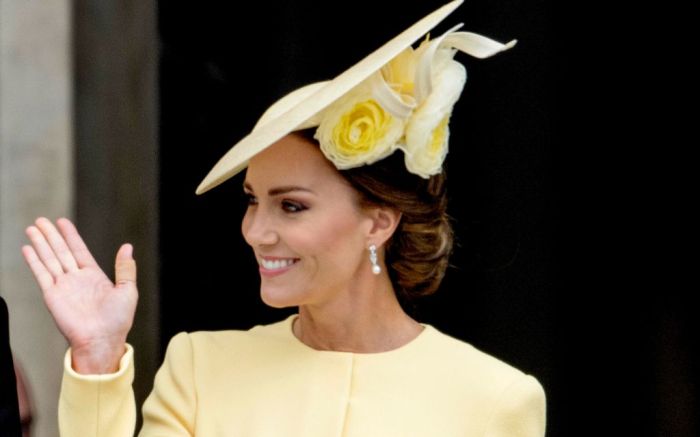 Prince William and Kate Middleton, along with Prince Charles and Camilla Parker Bowles, arrived at St. Paul’s cathedral for the second day of  Platinum Jubilee celebrations in honor of Queen Elizabeth’s birthday. The royal family happily shuffled into the cathedral, wearing their best formal wear for the occasion in order to celebrate the queen to the fullest.

Middleton arrived in a sunny yellow high-neck dress. The look was sectioned off through structured tailoring. Fabric wrapped to one side and then the other, crisscrossing and cinching the Duchess’s waist. The sleeves on the British royal were hemmed just above the wrists, while the skirt was hemmed at the midway point of her calves. Middleton held a beaded bag and cream gloves and wore a yellow fascinator at an angle atop her head, which was adorned with voluminous yellow flowers.

Middleton also brought the bling to the Jubilee, thanks to some diamond dangling earrings. Most importantly, Middleton flattered her feet in nude pointed-toe pumps, contrasting the pastel yellow with a neutral heel.

Click through the gallery to see some of Kate Middleton’s best style moments throughout the years.