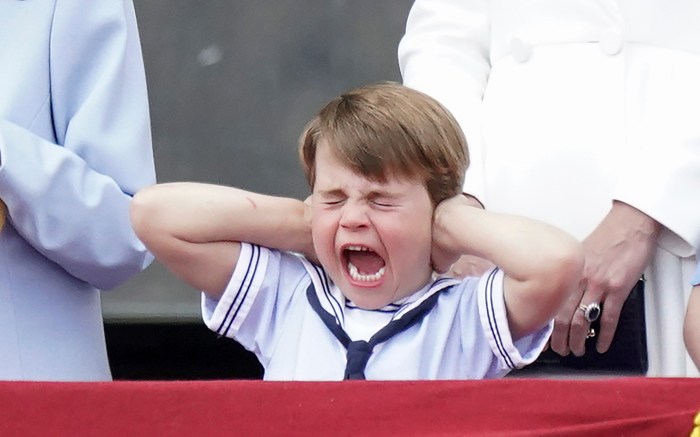 Queen Elizabeth’s Platinum Jubilee kicked off today with the annual Trooping of Colour, a showing of the United Kingdom’s armed forces marking the official birthday of the British Sovereign. While the Queen was the person of honor during the festivities, her great-grandson couldn’t help but steal a little bit of the spotlight, creating an “instant meme” when the entire royal family stepped out to greet attendees from the balcony of Buckingham Palace.

Prince William and Kate Middleton’s son Prince Louis wasn’t too thrilled about a boisterous military fly-past during the ceremony, leading the 4-year-old to cover his ears and scream to drown out the sound. The internet quickly fell in love with the adorable young royal’s age-appropriate reaction. The moment proved kids will always be kids — even if they are in line to the throne.

The youngest son of William and Kate also shared a sweet moment with his grandmother during the ceremony, which garnered additional adoration from onlookers. The two had a short conversation after the planes flew by, with Prince Louis pointing at the sky at one point. Royal or not, at the end of the day, he’s just a kid seeing some planes with his great-grandmother.

For the event, Prince Louis dressed in an adorable sailor outfit, which may look familiar to followers of the royal family. The outfit was nearly identical to the famed sailor-inspired shirt and shorts his father wore in 1985 to the Trooping of Colour when he was just 2 years old.

Queen Elizabeth’s Shoe Style Through the Years, From the ’60s to Today