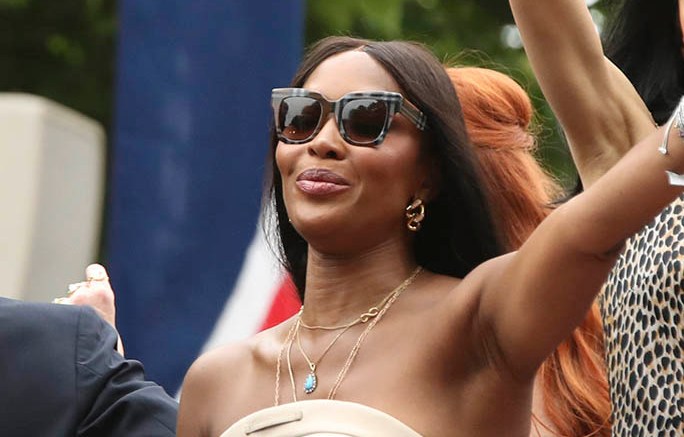 Naomi Campbell led a host of British stars at the Platinum Jubilee pageant, which took place through the streets of London on Sunday. The legendary supermodel was joined by Kate Moss on an open double decker bus — along with a group of other vehicles, representing each 10-year period of the Queen’s reign.

Campbell was effortlessly chic in a beige dress by Burberry. The neutral-tone number had a ruffled panel along the bust and brown buttons on the bodice. The garment gave the illusion of a trench coat with its belted waist and wide hemline.

In true fashion form, she accessorized with layered gold chains, multiple beaded bracelets and sleek square shades that were also by Burberry. To add an elegant touch to her ensemble, she draped a tan scarf around her shoulders while her long straight tresses cascaded down her back.

Unfortunately her footwear was not visible but it would be no surprise if the “Empire” alum finished things off with flat, platform sandals, a sharp set of pointed-toe pumps in a matching or neutral tone or platform sandals.

Naomi Campbell at the Platinum Jubilee Pageant on June 5, 2022.The Queen’s Platinum Jubilee celebrates Queen Elizabeth II’s unprecedented 70-year reign over the United Kingdom and associated Commonwealths. The Queen is the first British Monarch to achieve a Platinum Jubilee following seven decades of service to the throne, longer than any other British royal in history. The Platinum Jubilee, which runs from June 2 to June 5, is a four-day bank holiday that will include celebrations all over the U.K., including parades, performances, and other public gatherings.