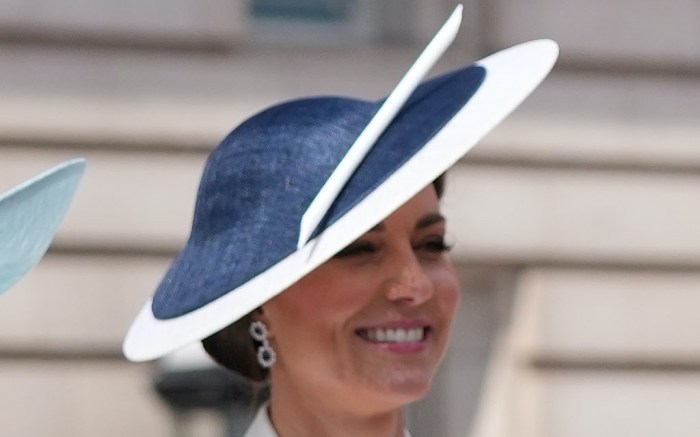 For the occasion, the Duchess of Cambridge shone in a white Alexander McQueen dress. Worn while in a carriage during the event’s Trooping the Colour parade with her children, Prince George, Prince Louis and Princess Charlotte, and Camilla, Duchess of Cornwall, today in London, the piece featured a blazer silhouette with sharp shoulders, lapels and a buttoned front. Middleton accessorized with a navy fascinator by Philip Treacy, which was complete with white trim that complemented her dress.

The royal finished her ensemble with a sparkling diamond pendant necklace and drop earrings, each complete with gleaming blue gemstones.

Though her footwear wasn’t visible, it’s likely Middleton opted for a set of coordinating or matching pointed-toe pumps. The style has become synonymous with the mother of three, as she frequently wears stiletto-heeled pairs in a range of textures and colors. In fact, her go-to style is Gianvito Rossi’s 105 pump, which she rotationally re-wears and owns in at least five colorways.

Discover Middleton’s top shoe moments over the years in the gallery.