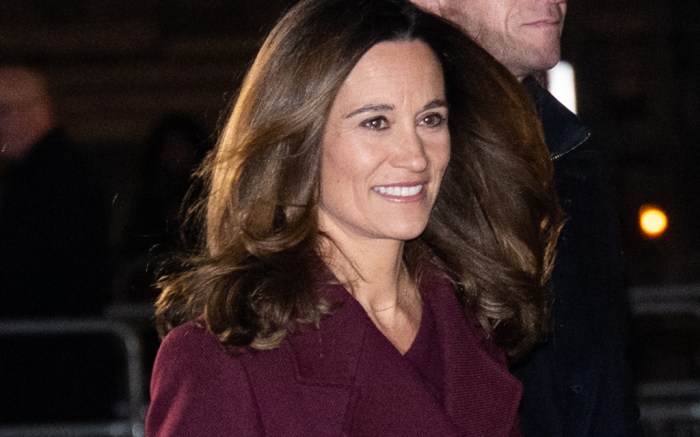 Pippa Middleton matched her sister Kate Middleton, Princess of Wales, while in attendance at the “Together at Christmas” carol service yesterday night. The event, held at Westminster Abbey in London, is a holiday special attended by royal family members including her brother-in-law Prince William, Camilla, Queen Consort and King Charles III.

For the festive occasion, Pippa was dressed in cozy outerwear and classic boots. She attended the event alongside her husband James Matthews.

Pippa’s look consisted of a burgundy coat with rows of black buttons running down the front. The outerwear was worn belted, defining her silhouette, and paired alongside a taupe clutch. Underneath her coat, the socialite seemingly wore a burgundy dress, the formal style peeking out from under the collar of her coat.

Kate wore a similar coat to her sister’s.  The princess donned a coat dress with a wrapped silhouette, long sleeves and a calf-length hem. The piece was paired with a matching glossy reptilian textured clutch, as well as sparkling vertical ruby and diamond drop earrings.

When it came down to footwear, Pippa sported brow knee-high boots with rounded toes and a shiny finish that transitioned into block heels, ranging around 2 to 3 inches in height. The footwear was a knee-high style that added to the vintage quality of the author’s look.

Pippa often gravitates towards low-heeled sandals, flats or lace-up espadrille wedges. The royal has worn the styles numerous times over the years for warm weather occasions, so it would appear likely she’s continued the trajectory for the Jubilee. These often hail from a range of brands, including Castaner, London Sole and Ash.

Kate Middleton’s “Together at Christmas” concert is a holiday carol service held at Westminster Abbey, attended by royal family members including Prince William, Camilla, Queen Consort and King Charles III. The second annual occasion will find the Princess of Wales paying tribute to the late Queen Elizabeth II, broadcast in the United Kingdom on ITV1 on Christmas Eve. The broadcast will include an introduction from Middleton, as well as performances by musicians including Melanie C., Alfie Boe and Samantha Barks.
PHOTOS: Kate Middleton’s ‘Together at Christmas’ at Westminster Abbey: Royal Members & Celebrity Arrivals