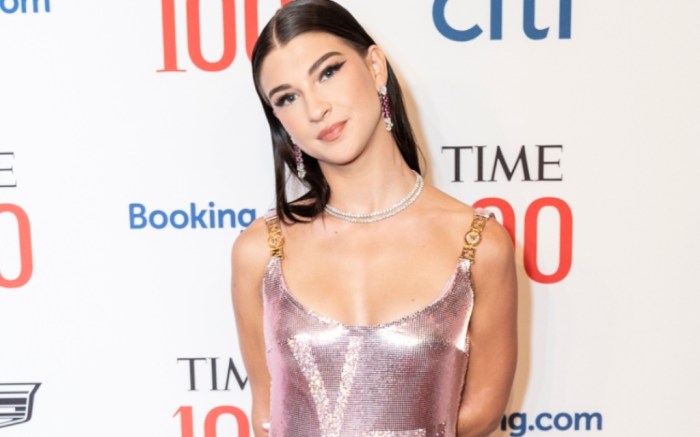 Phoebe Gates gave her Instagram a peek at some of her favorite moments from 2022. “Ready for you, 2023” Phoebe wrote under the post.

On Tuesday, Gates uploaded a new Reel, which highlights various special moments from the year including when she attended the Time 100 Gala with her father Microsoft founder and philanthropist Bill Gates.

For the occasion, Phoebe donned a silver Fendace gown that featured a satin boned corset, high back slit and crystal embellished Fendace hardware at the shoulder straps. She finished off her outfit with a pair of strappy PVC sandals.

Phoebe continued to serve up some serious style throughout the video. The video began with the 20-year-old socialite sitting perched on a block stone in a plaid strapless minidress and gold sparkly sneakers.

Another clip sees the influencer standing in front of a ferris wheel wearing a green crystal-embellished minidress that featured thin spaghetti straps and a small slit on the side. Phoebe completed her look with a pair of nude strappy sandals.

Phoebe later posed for a mirror selfie in a black dress that was decorated with dragons and included a slight flare on the hem. The Standford University student tied her outfit together with black knee-high boots.

Lastly, a quick clip sees Phoebe standing on the sidewalk in a red and white floral dress. Finishing the socialite’s look was a pair of chunky white sneakers.

Gates has become an emerging star in the fashion world, particularly after attending Fashion Month shows this past season for Aje, Alice + Olivia, Michael Kors and Valentino. When it comes to footwear, she often wears stiletto-heeled or platform sandals in neutral tones for formal occasions, hailing from top brands including Christian Louboutin. When off-duty, Phoebe can be spotted in low-top Louis Vuitton and Golden Goose sneakers, as well.

PHOTOS: Click here to see how high heels have evolved over the decades.