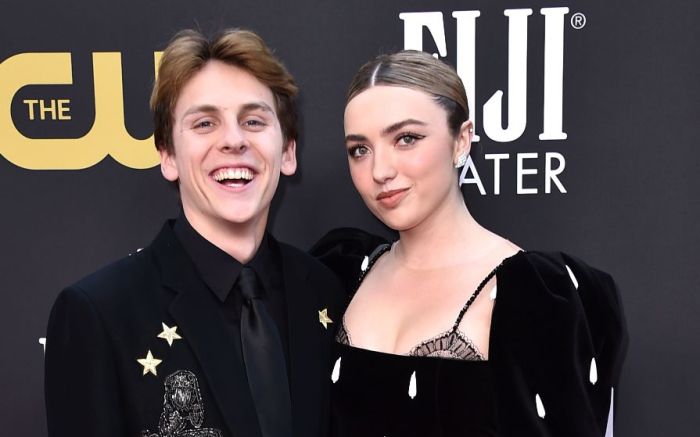 List wore a black dress with pearl detailing and a square neckline. The already-gigantic gown looked larger than life thanks to the exaggerated shoulders. The square neckline is decorated with lace detailing that is reminiscent of a bralette. The straps seem to be made with black beadwork, held together on a skin-colored mesh. The dress tapers off at the bottom, becoming more skinny as it goes down, leaving all the volume up top. List’s sleeves are cuffed and white, starkly contrasting her dark black dress.

List wears a serious set of black and white nails on her fingers and sparkling studs on her ears. The actress’ hair is parted in the middle and slicked back. Meanwhile, her boyfriend Jacob Bertrand stands by her side wearing an all-black suit with intricate beadwork on the lapel. The jacket is littered with beaded stars in yellow.

List opted for a pair of black peep-toe pumps while her boyfriend went for some classic black dress shoes with a shiny finish. The couple looked smashing in black, both parties finding simple ways to spice up an all-black ensemble with the right details.
The Critics’ Choice Awards honor the year’s top pictures and performances of film and television. This year’s event, hosted by Taye Diggs and Nicole Byer, will be broadcast from the Century Plaza Hotel in Los Angeles. Leading the film categories are “West Side Story” and “Belfast,” while the TV side is led by “Succession.” The Critics Choice acting categories are led by stars from most nominated projects, including Lady Gaga, Kristen Stewart, Will Smith, Ariana DeBose, Kirsten Dunst, and Andrew Garfield.