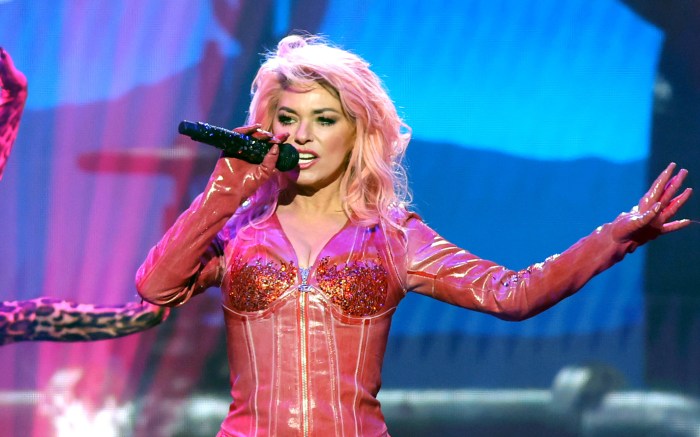 Twain performed a medley of her biggest hits, like “That Don’t Impress Me Much,” with her latest single “Waking Up Dreaming.”

First, the singer hit the stage in a fiery outfit. She wore a shiny red trench coat atop a cowboy-inspired one-piece designed with a corseted bodice and PVC paneling by Diesel, featuring classic cowgirl chaps. For her second look, Twain took off the trench coat revealing diamond fringe bottoms that were designed in the likeness of chaps.

For her third look, Twain wore a shimmering bodysuit with matching gloves that she paired with her vibrant pink hair.

The footwear selection was nothing short of eye-catching. She paired metallic platform sandals with the bodysuit that hoisted the look by at least 3 inches.

Twain is having quite the fashionable year as she commanded attention at the 15th Annual Academy of Country Music Honors in Nashville, Tenn. wearing a plunging black velvet gown and leopard cowboy hat. That same night country superstar Kelsea Ballerini paid homage to Shania Twain by slipping into the very dress Twain wore to the 1999 Grammy Awards.