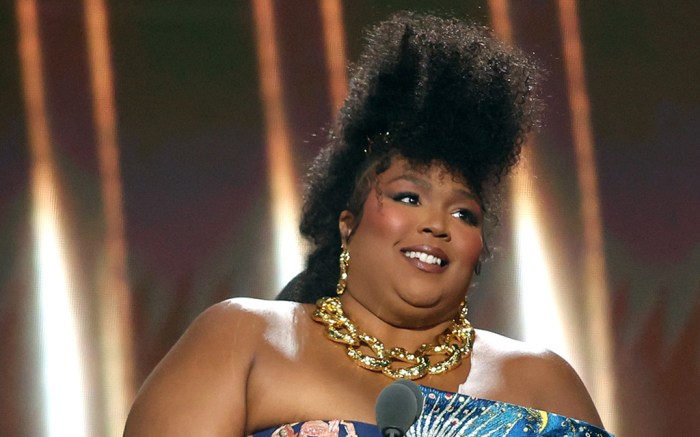 Joined on stage by her mother Shari Johnson-Jefferson, the “About Damn Time” singer received the People’s Champion award dressed in a custom Alexander McQueen gown and wild ankle booties.

Lizzo’s look consisted of an off-the-shoulder blue gown made with colorful prints and sprawling depictions of animals and botanicals. The motifs were made of iridescent and vibrated fabrics. The bodice of the dress was caged, giving way to cutouts that diversified the silhouette. Beyond the corseted bodice was a voluminous skirt with ruffles and fleeting strips of fabric.

As for accessories, Lizzo piled on the gold jewelry, taking a maximalist approach. The show-stopping performer wore her long black hair in mohawk style and wore dramatic stage makeup to match, turning up the glam.

On her feet, the flutist sported Hieronymus Bosch embroidered boots from McQueen’s Spring 2023 collection with a shard wedge heel in opposing hues from blue to green to match her dress. A go-to shoe style for many, ankle boots are extremely versatile shoes that can feature a variety of heel heights. Boots that stop at the ankle can be practical and dressy.