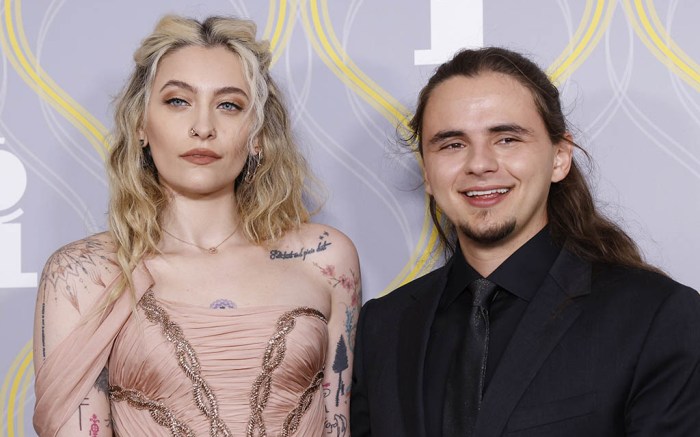 Paris Jackson stunned on the red carpet at the 2022 Tony Awards in New York on Sunday with a sparkling blush dress with her brother Prince Jackson by her side. Along with their brother Blanket, who was not present, the Jackson siblings share a father in the late Michael Jackson.

The star stood side by side with her older brother, looking quite dapper for the big event. Paris spoke to her own tastes, wearing an edgy nude blush gown, accessorizing liberally. The dress was made of a nude, floor-length and opaque material that was fitted with rose gold crisscrossing chains that wrapped around and up the bodice.

The chain detailing broke up all the tan, making the star shine just a little brighter that night. She accessorized with a beaded wooden bracelet and rose gold rings. The star’s shoes were hidden underneath the hem of her long gown, but she typically opts for towering platform silhouettes with block heels.

The Tony Awards 2022, which celebrate the top theater performances on Broadway, are held at Radio City Music Hall in New York City and air on CBS. The ceremony, hosted by Ariana DeBose, was preceded by “The Tony Awards: Act One” on Paramount+, which introduced special performances. The top nominations were led by “A Strange Loop (11), followed by “MJ” and “Paradise Square” with 10 nominations each, “Company” (9), and “The Lehman Trilogy” (8). The evening included performances from all six nominated shows for Best Musical (“Six,” “Paradise Square,” “MJ,” “Mr. Saturday Night,” “Girl From the North Country” and “A Strange Loop”), as well as “Company” and “The Music Man” revivals and Billy Porter, Bernadette Peters, The New York City Gay Men’s Chorus, and the original Broadway cast of 2007’s “Spring Awakening.”In addition to the program’s traditional “In Memoriam” segment, the broadcast also included a tribute to the understudies and swings who worked throughout the 2021 Broadway season. Among the star-studded array of presenters were Andrew Garfield, Bowen Yang, Jessica Chastain, Jennifer Hudson, Cynthia Erivo, Vanessa Hudgens and Paris and Prince Jackson.

Click through the gallery to see Paris Hilton’s Boho Chic style evolution throughout the years.