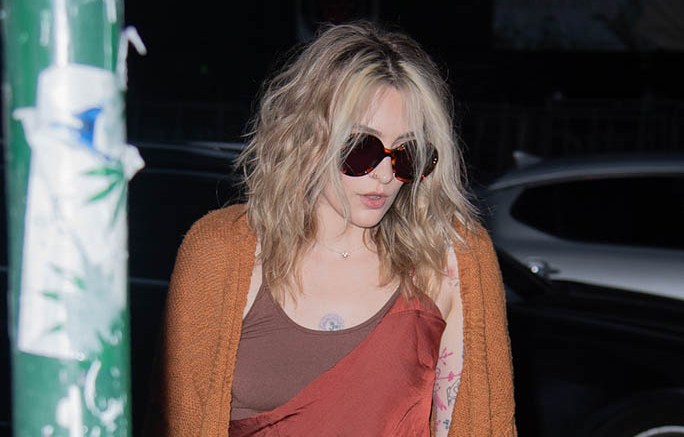 Paris Jackson put a grunge twist on a casual outfit while arriving at the Mercury Lounge for a concert in New York City on Wednesday night. The model and singer braced the rainy east coast weather in an oversized knitted sweater. Jackson wore the cozy staple over a burnt orange mini dress.

The “Habit” actress coordinated the ensemble with a plaid shirt that she wrapped around her waist and carried a tan backpack as she made her way inside the venue. To further accessorize the look, she covered her eyes with large round shades and a plethora of gold midi rings.

The “Sex Appeal” actress continued to add an edge to her look with barely-there fishnet tights and a pair of burgundy Dr. Martens boots. Sticking to a comfy vibe, she left the boots undone.

Jackson recently tapped the British footwear brand while performing her new single, “Lighthouse” on “The Tonight Show Starring Jimmy Fallon.” The musician rocked out with Jimmy Fallon in a golden crushed velvet mini dress and chunky black Dr. Martens boots. Originally designed to be worn by soldiers on the battlefield, combat boots are utilitarian footwear created for foot protection, ankle support and a gripping tread. Classically made of black leather, combat boots were adopted by counterculture movements in the 1980s and 1990s, like the goth, punk, grunge and heavy metal scenes.

While her wardrobe may consist of looser silhouettes and fringed elements, the punk rock princess has taped top designers like Dior, Balmain, Christian Louboutin and Calvin Klein for her red carpet looks. Her personal style seems to be a mix of grunge with references to certain fashion eras.

See more of Jackson’s style through the years.