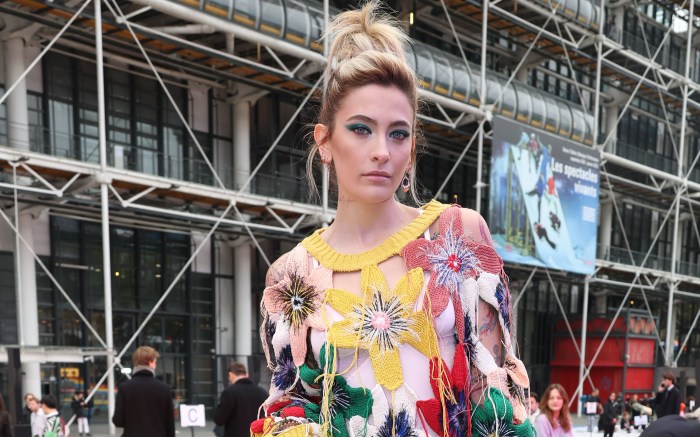 The 24-year-old model was a refreshing pop of color on the show’s front row. Jackson wore a light pink bodysuit underneath a floral crochet cutout dress with yellow mini trimming and loose tassels cascading down the piece. She carried a Stella McCartney’s shoulder Bag that had a diamond-cut chain and completed the look with an assortment of gold rings and hoops.

When it came down to footwear, Jackson paired the look with auburn-colored Stella McCartney’s cowboy ankle boots. featuring a Cuban heel.

Jackson kept her blond hair in a messy bun style keeping the focus on her bold makeup which featured a turquoise eye look and a nude lip. Her glamorous look was created by hair stylist Miles Jeffries and makeup artist Pauly Blanch. The two have worked on other stars including Jenna Ortega, Halle Bailey, and Cassie.

Jackson sat front row as McCartney debuted her new Spring 2023 collection. The model has worked with the brand on multiple occasions. She was the face of their first Mylo collection in March 2021. Other stars attended the designer’s runway show including Karlie Kloss, Poppy Delevingne, and Gigi Hadid.

PHOTOS: A Look at Paris Jackson’s Boho-Chic Style Through the Years