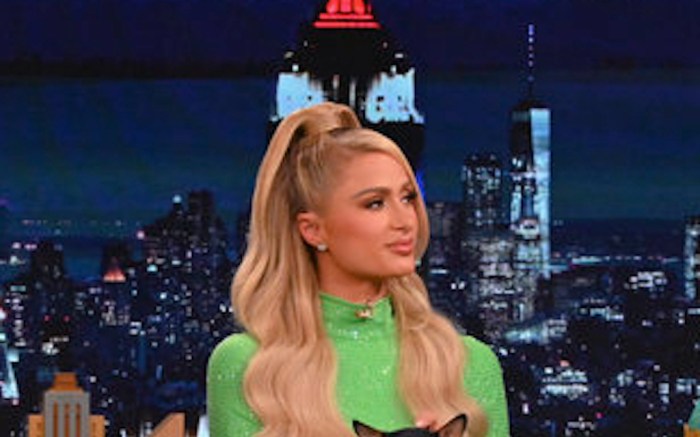 The entrepreneur attended “The Tonight Show Starring Jimmy Fallon” on Monday, where she talked about her marriage to Carter Reum last year featured on her Peacock show, “Paris in Love,” and releasing her own NFT series. She also gave audience members their own NFTs from her series.

Hilton also had a fashion faux-pas during this appearance and accidentally wore two different heels: one had a toe cap covered in silver crystals, and the other was a nude pump. It was brought to the forefront because of the official TikTok account for “The Tonight Show” posted a video of the error.

In the clip, it shows Paris walking across the stage and the clip zooming in on her feet to show that she had on a nude heel on one foot and a crystallized stiletto on the other.

“The Tonight Show” captioned the clip, “When you rush out of the house with the wrong shoes,” and tagged Paris’ Tiktok handle. On Thursday, Hilton took to her TikTok account to address the mistake, where she stood wearing a pink tracksuit and pink sunglasses, and in the video, she puts hers next to “The Tonight Show” video and then shakes her head and face palms.

But that wasn’t the only fashion moment Paris had during the appearance.

For the outfit, Hilton donned a neon green sequined turtleneck dress that she accessorized with glittery nude fingerless gloves.

When it came down to the shoes, Hilton opted for a pair of pointy silver pumps with transparent panels that perfectly unified her outfit. The shoes incorporated crystals for an extra pop.

Alongside Hilton was her mother, Kathy, who was there to play a game of “Life Coach.” The other guest of the night was Tiffany Haddish, who made an appearance remotely.

As of late, Hilton has donned a variety of styles that show her penchant for fashion-forward garments. From tweed two-piece suits to multicolored printed caftans to glittery dresses, Hilton has showcased that she fancies eye-catching clothing. On the footwear front, Hilton wears pointed-toe pumps, height-defying platforms and breezy flats that complement her outfits nicely while also adding that signature Hilton flair to her looks.

Hilton is also an entrepreneur, having launched her own line of footwear. The mogul also has 19 product lines that continue to grow. “I’m about to release my 29th fragrance,” she told FN for an August 2021 cover story, listing off her current operations. “I’m investing in a lot of tech products and VR and NFT and writing my third book and doing my second album. And I have my podcasting company, my deal with Warner Brothers, my own production company deal, and my new show.”

Pop on a pair of silver pumps for a sleek getup.