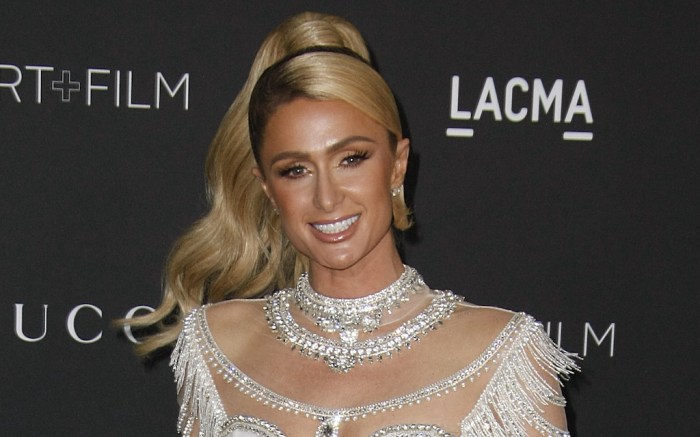 The entrepreneur posted a photoset on Instagram yesterday that showed her vacationing in Dubai and saddled upon a camel. For her festive ensemble, Hilton opted for a tropical-printed, multicolored caftan and pants set that perfectly matched her vibe. Under, she popped on a black tank top for a touch of color contrast. The caftan’s flowy demeanor matched the pant’s loose-fit for a modern look. She accessorized with a pair of black and brown aviators and a pink scarf tied around her head.

When it came down to the shoes, Hilton opted for a pair of neutral-colored Mary Jane flats from Rothy’s that unified the outfit.

Hilton has a chic and fashion-forward sartorial aesthetic that made her own of the early aughts biggest style icons. For example, she and her sister were two of the most notable celebs who helped put Juicy Couture on the map in the early 2000s. Riddled through her Instagram feed are pictures of her wearing intricate swimwear, dashing tailoring, flowy skirts and printed separates that all have that special Paris flair. On the footwear front, she has an affinity for flats, sandals, boots and pumps that all ground her getups.

Hilton is also an entrepreneur, having launched her own line of footwear. The mogul also has 19 product lines that continue to grow. “I’m about to release my 29th fragrance,” she told FN for an August 2021 cover story, listing off her current operations. “I’m investing in a lot of tech products and VR and NFT and writing my third book and doing my second album. And I have my podcasting company, my deal with Warner Brothers, my own production company deal, and my new show.”

Slip into a pair of neutral-colored Mary Jane flats.