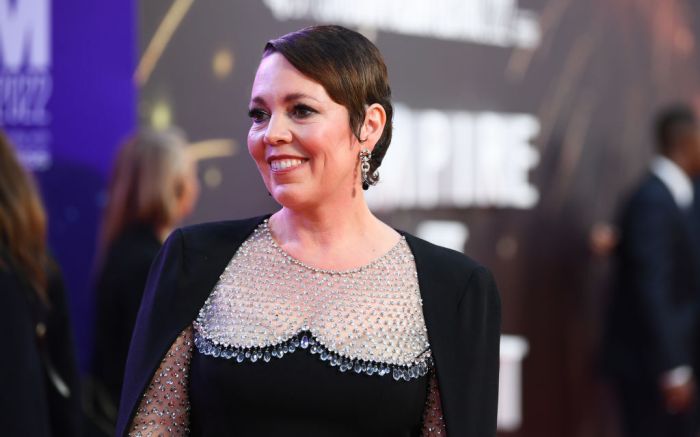 The “Crown” actress wore a black flowing gown to the screening. The glamorous dress featured a crystal-embellished neckline that followed through to her long sleeves with a black cape laying nicely on her shoulders.

Colman accessorized with two silver rings and earrings that matched perfectly with her sparkling look. She kept the neutral tones going all the way until the finishing touch with a simple black clutch fastened by a silver clasp.

Her glamorous footwear stole the show with a sheer body and a metallic silver pointed toe. The back of her footwear is covered by her floor-length gown but it likely featured a stiletto heel.

Colman is always styled by Miranda Almond who works exclusively with the actress, Hayley Atwell, and Ruth Gemmel.

The Netflix star plays one of the leads in the drama film “Empire of Light”. Colman will be depicting a 1980s romance story on screen alongside Michael Ward and Crystal Clarke. The highly anticipated film will be released in theaters on Dec. 9.

The British Film Institute’s London Film Festival starts on October 5 and runs until the 16th with over 300 films and documentaries playing in ten towns and cities across the UK. The Oscar-winning actress Tilda Swinton is BFI’s fellow and jury chair of this year’s festival. There have been many sights to see already including Rebel Wilson, Lily James, and Jodie Turner-Smith.