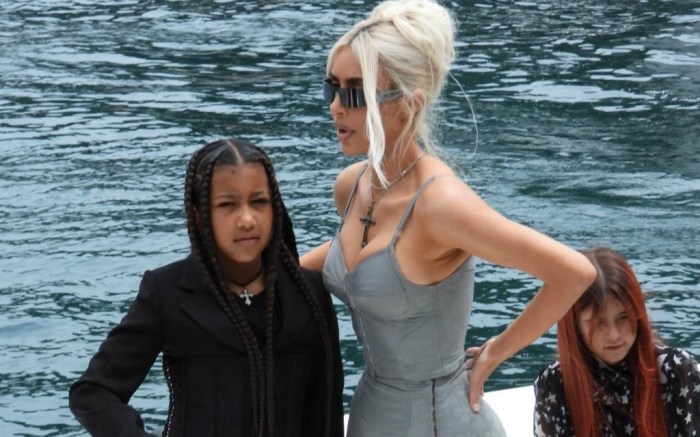 North West and her mother Kim Kardashian made an adorable dancing duo in their latest TikTok video. On the pair’s joint TikTok account, the mother and daughter partake in one of the latest trends set to the sound of Alpha Wolf.

For the fun recording, the two stand in the middle of a room and move from side to side as they get lower and lower. Both Kardashian and West sported casual outfits for the occasion.

North sported a white graphic T-shirt with red and yellow polka dot shorts. The eldest child of Kim Kardashian and Kanye West styled her hair in long knotless braids and accessorized with a watch. Sticking to a chill vibe at home, the 9-year-old star went barefoot while showcasing her moves.

When it comes to shoes, North often wears sporty and comfortable styles. The former “Keeping Up With the Kardashians” star is known for often wearing chunky Yeezy sneakers, including custom designs, as well as fluffy slide sandals by children’s brands including Akid. However, in recent months, she’s also adopted an edgy aesthetic, wearing styles like leather combat boots and Balenciaga’s nameplate platform Crocs clogs. West has also worn her first pair of high heels publicly in May 2022; formerly, she was frequently known to wear Kardashian’s high-end footwear around the house as a toddler— even her $1,700 mirrored Balenciaga boots. Now that she’s evidently begun wearing more styles in public, only time will tell if they’ll become signatures as she grows up.

PHOTOS: Discover North West’s shoe style over the years in the gallery.