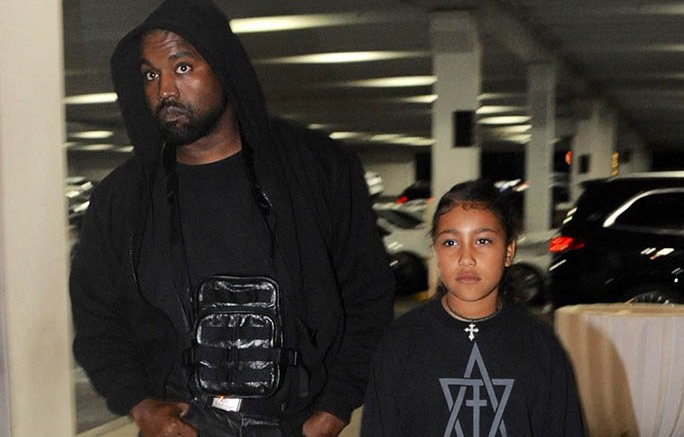 North West and Kanye West were a matching father-daughter duo while out in Los Angeles on Nov. 29. The pair was spotted spending quality time together while shopping at a mall.

Both North and Kanye sported casual attire for the outing. The eldest child of Kim Kardashian and Kanye West wore a long-sleeve black Donda T-shirt. The merch comes exclusively from Kanye’s 2021 listening party at the Mercedes-Benz Stadium in Atlanta. The 9-year-old star teamed the top with black basketball shorts. Sticking to a chill vibe, she pulled her hair back into a low ponytail and simply accessorized with a silver cross choker necklace.

North completed her look with black tube socks and the Adidas Yeezy Boost 700 MNVN sneakers in Bright Cyan. The “Bright Cyan” Yeezy Boost MNVN brings bright vibrant color to the silhouette. A cyan-blue nylon upper is broken up by reflective “700” branding, exclusive to the MNVN 700 iteration. A no-tie lace system helps keep you secured and a full-length boost cushioning system is encased by a black rubber midsole and outsole.

Kanye was comfortably dressed while out with North. The “Flashing Lights” rapper donned a black hoodie with a T-shirt and charcoal jeans. He kept a small bag draped around his neck and slipped into the Balenciaga Excavator boot.

North’s shoe style is often sporty and comfortable. The former “Keeping Up With the Kardashians” star is known for often wearing chunky Yeezy sneakers, including custom designs, as well as fluffy slide sandals by children’s brands including Akid. However, in recent months, she’s also adopted an edgy aesthetic, wearing styles like leather combat boots and Balenciaga’s nameplate platform Crocs clogs. West has also worn her first pair of high heels publicly in May 2022; formerly, she was frequently known to wear Kardashian’s high-end footwear around the house as a toddler— even her $1,700 mirrored Balenciaga boots. Now that she’s evidently begun wearing more styles in public, only time will tell if they’ll become signatures as she grows up.

PHOTOS: Discover West’s shoe style over the years in the gallery.