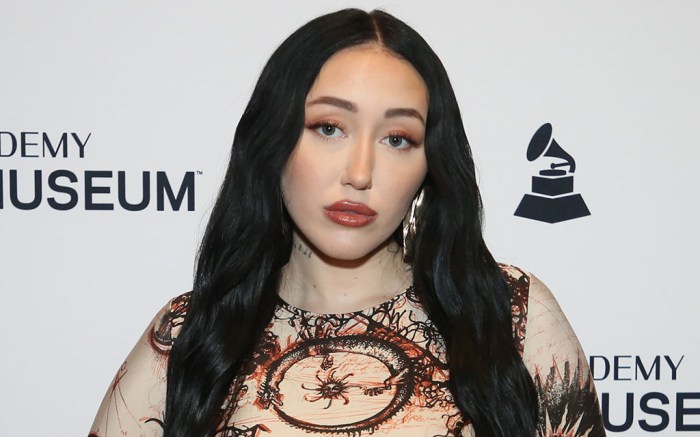 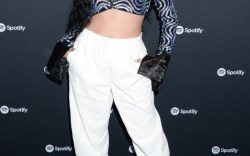 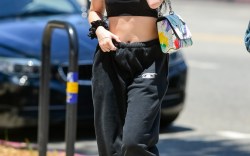 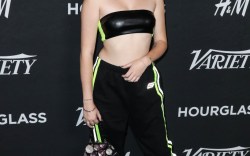 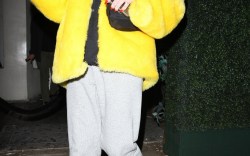 Noah Cyrus performed live during “A New York Evening” at National Sawdust in Brooklyn yesterday. The “All Falls Down” singer was clad in a gothic graffitied maxi dress by Marine Serre and staple black boots.

The lengthy cream-colored dress, made of comfy stretch fabric, was decorated with a graphic black and red doodle-style pattern. The garment was paired alongside chunky rings fitted with large shiny gemstones and reflective silver hoops that further dressed up Cyrus’ edgy ensemble.

The former “Hannah Montana” cast member’s long black hair was styled down in waves, parted in the middle, while her makeup centered around a dusty rose shade.

As for footwear, the “Ponyo” actress stomped around the stage in “Freya” DuoBoots which were black pointed-toe knee-high leather boots that stopped just below the younger Cyrus sister’s knees.  Often worn with skirts, knee-high boots are a wise choice in fall and winter for protecting the leg from the elements while still allowing the wearer to show some leg.

Cyrus often wears strappy sandals, combat, and thigh-high boots on the red carpet from Stuart Weitzman, Barbara Bui, and Public Desire. The star can frequently be spotted in a variety of athletic and comfy Nike sneakers on and off the red carpet, as well. However, Cyrus is also unafraid of a major boost in height for events, as proven by the towering Marc Jacobs and Ruthie Davis platform heels she’s worn on multiple occasions over the years.