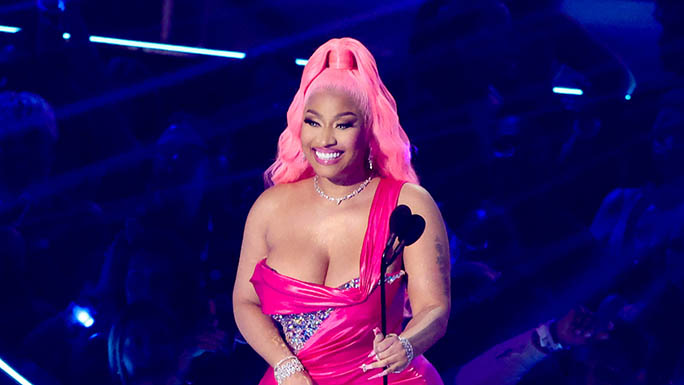 Nicki Minaj had an incredible night at the 2022 MTV Video Music Awards held at the Prudential Center in Newark, NJ on Sunday night.

In addition to receiving this year’s Michael Jackson Video Vanguard Award, the Queen of Rap delivered an iconic performance that included a medley of her greatest hits. She also took home the Best Hip Hop Video Award for her collaborative single with Lil Baby, “Do We Have A Problem?”

To celebrate the big night, the chart topping entertainer attended a VMAs afterparty in New York City. Minaj arrived alongside her team in a silver satin gown by Burberry.

The garment had a ruched neckline, large bow on the side of the bodice and extreme thigh-high slit. Sticking to her signature Barbie aesthetic, the “Super Freak” hitmaker styled her bright pink tresses half up, half down and flipped the ends up.

To amp up the glam factor, she opted for a sultry smokey eye and a pink pout. She continued to make the color the focal point of her outfit by adding long hot pink pointy nails. Minaj uploaded an Instagram reel, which revealed that she completed her look with a set of strappy sandals.