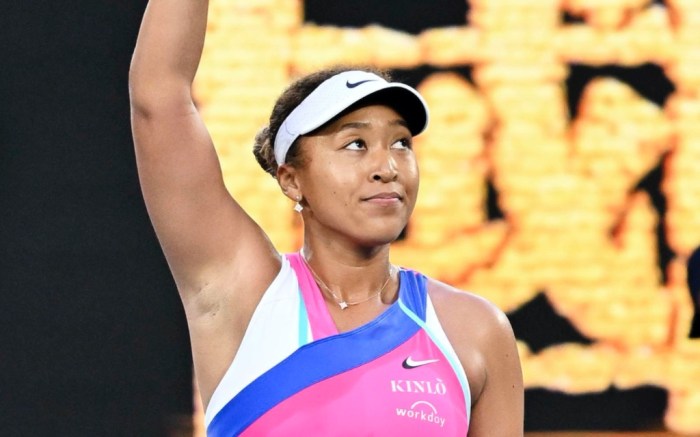 Naomi Osaka made a victorious return recently at the Mubadala Silicon Valley Classic.

For the match, Osaka wore a short flowing yellow Nike skirt with an elastic waistband and a black Nike Swoosh printed on the side. The pleated athletic skirt also featured gray detailing at the seams. On top, she wore a white shirt with blue stitching.

The 24-year-old wore her custom Nike shoes, which featured a white base, a pink tick and laces as well as a purple under sole.

For her post-match interview, the athlete slipped on a black zip-up jacket. After her win over Zheng Qiwen, Osaka made note of her appreciation for her father. She pointed her father out and noted “He’s the guy wearing sunglasses even though its dark outside! He hasn’t been around in a little minute so this is our tournament back together and it’s really good for him to be back because he always makes me smile.”

Osaka posted the interview on her social media with the caption “S/o my dad for the bad jokes lol. Yesterday was really fun see you guys on Thursday.”

Osaka recently brought her father back to her team, who worked as her primary coach until 2018. The tennis pro recently parted ways with her coach Wim Fissette after working together for two years.

When it comes to Osaka’s off-court fashion, she tends to favor chic and comfortable outfits which she pairs with various Nike silhouettes including her go-to Nike Air Force 1s. She loves to incorporate bold prints and earth-toned neutral into her cozy style.