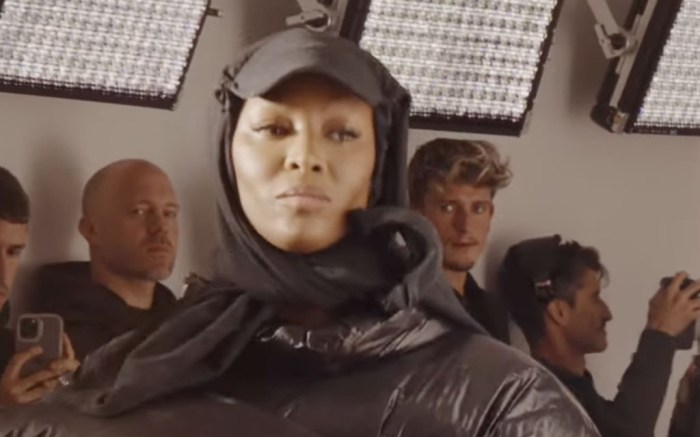 Campbell wore an all-black look, with a dramatic puffer jacket that had a deconstructed layer over the main piece with oversized puffy panels falling down on her back. The supermodel also wore a black hat with a matching scarf covering her ears and wrapped around her neck.

Campbell’s outfit was completed with a pair of black legging-pants and matching ancient-style flat boots. The shoes are made with a dark denim material.

Yeezy and Campbell’s partnership dates back to 2016 when the supermodel made a surprise appearance during Yeezy’s Season 3 runway.

West confirmed that he would be debuting a new Yeezy SZN 9 collection for his brand during Paris Fashion Week one day before the event after hinting its unveiling one month earlier. The show today is the first since the brand introduced the Season 8 fall collection in 2020. Yeezy’s comeback happens a month after Ye said in an interview with Bloomberg that it was time for him to “go it alone” and cut ties from the corporate entities linked to his Yeezy brand, namely Adidas and Gap.