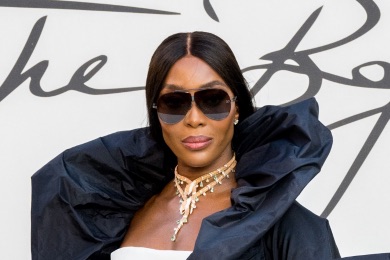 The stars aligned in the Italian city on July 8th to show a masterful collection by Valentino creative director Pierpaolo Piccioli. Guests that arrived were faced with a lengthy flight of towering stairs where models ascended one by one in the most expertly designed couture creations. Campbell had a front row seat and her look had just as much drama as those on the runway.

The supermodel dazzled in a lengthy black cape with an extreme collar that gave way to ruffles upon ruffles of fabric. Underneath the gallant coat, Campbell wore a white top with a straight across neckline paired with white trousers. The model wore loads of layered jewelry and large black sunglasses, heavily accessorizing the outfit. While Campbell wasn’t modeling any looks this time around, the star stole the show, stomping around in black peep-toe sandal heels with chunky wedges. The statement shoe was just that, setting the stage for other shoes to come. Campbell has always been a trend setter. As the only star to wear a cape with a train to the couture show it’s safe to say that she is living up to her starry reputation.

Valentino presented its haute couture show in Rome on July 8. The star-studded runway event was held across the streets running from Piazza Mignanelli, where the brand has its headquarters, and near the famed Spanish Steps. In honor of the show, Valentino worked with the city to restore the mosaics of the Terme di Caracalla, the city’s antique and second-largest Roman public baths, where the brand’s post-show dinner was held. It also donated new palm trees near the Spanish Steps.

Naomi Campbell has a lifetime of amazing looks. Check them out here.