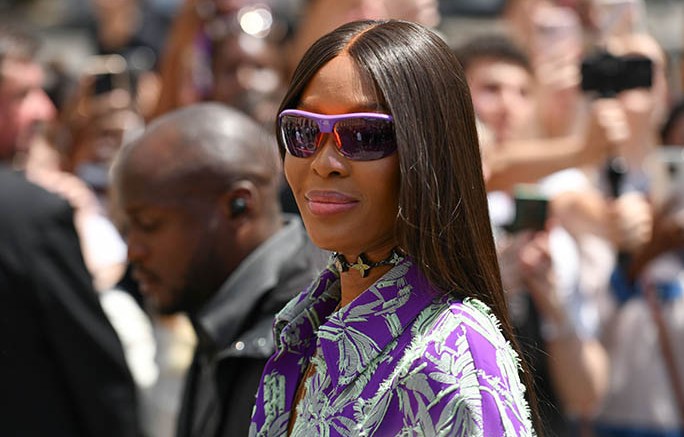 Naomi Campbell put her fashion credentials to work as she stepped out for the Louis Vuitton Menswear Spring/Summer 2023 fashion show during Paris Fashion Week today. Justin Timberlake and Jessica Biel were among the other famous guests who attended the outdoor affair, which took place in the French capital.

Campbell made a striking arrival at the event. The legendary supermodel kicked off the summer season in a tropical print ensemble from the luxury French fashion house. Her bright attire matched the playful theme of the show perfectly, which Louis Vuitton described as a “magnified playground” on its Instagram account.

Campbell was certainly dressed for the weather and occasion, deciding to go braless underneath a Hawaiian-style shirt that she kept unbuttoned. The boxy separate included an embroidered floral design, sharp structured collar and wide sleeves. The “Empire” actress teamed her top with matching trousers. To amp up the glam, Campbell accessorized with a funky choker, layered necklaces and carried her essentials in a square clutch. She opted for minimal makeup with a glossy neutral pout. Her long dark tresses were parted in the middle and styled bone straight.

She gave her look a retro touch with futuristic purple shades, a bevy of bracelets and pointy metallic shoes. The shoe style peaked out slightly underneath her pants leg and appeared to feature a shiny elongated pointed-toe. When it comes to footwear, the singer favors pointed-toe pumps in neutral tones or platform sandals.

Campbell has an utterly chic and modern sartorial taste that she wears during live appearances and in streetwear photos alike. She has modeled in campaigns for labels like Versace, Givenchy and Calvin Klein. She has also walked in runway shows for brands like Alaïa, Valentino, Louis Vuitton and Marc Jacobs.