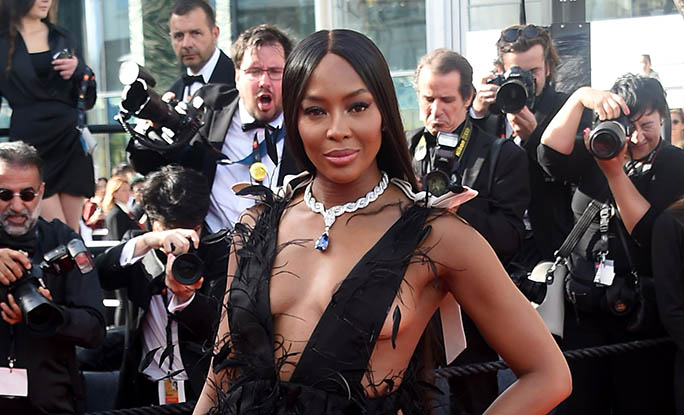 Naomi Campbell made quite the arrival at the screening of “Decision to Leave (Heojil Kyolshim)” during the 75th annual Cannes Film Festival at Palais des Festivals on Monday.

The legendary supermodel put a risky spin on a gorgeous black gown by Valentino. The eye-catching number featured a plunging deep V-neckline, a wide cutout on the side and a billowy feathered skirt. The dress also had white bow details on the back and a modest train that delicately swept the red carpet while she walked.

The length of the garment didn’t allow for a peek at her footwear choice, but it is likely that she finished things off with platform sandals or sleek pumps. On the runways and red carpets, Campbell has worn footwear ranging from Westwood’s 9-inch reptilian heels to platform sandals and pumps by Versace, Alexander McQueen and Gucci.

Prior to heading the event, Campbell was spotted out in a more toned-down and casual look. The “Empire” alum slipped into a long printed blue maxi dress with Air Jordan Retro High Silver Toe sneakers. The women’s Jordan 1 Silver Toe is a spinoff of the 2018 Jordan 1 High Gold Toe, replacing metallic gold patent leather construction with metallic silver crinkled leather, while white and black leather comprise the mid-panel, toe guard, and Swoosh as a nod to other classic black toe designs.