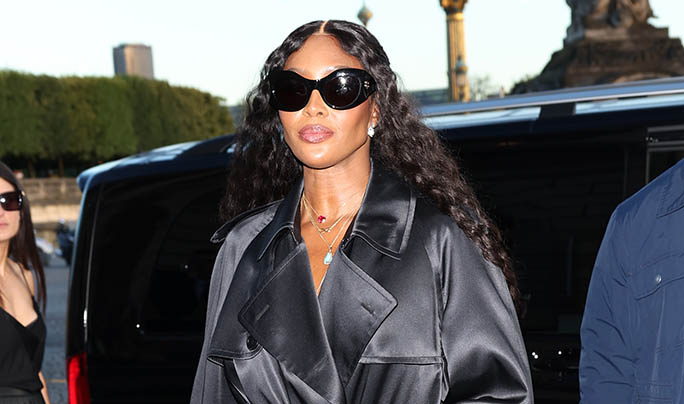 Hours after shutting down the runway in a massive Victorian ballgown at Balenciaga’s Haute Couture show during Paris Fashion Week on Wednesday, Naomi Campbell came through with another show-stopping ensemble. The iconic supermodel showcased her chic sartorial prowess as she made her way into the Hotel de la Marine for the luxury label’s dinner party.

Campbell served a monochromatic moment with a modern twist, stepping out in a black floor-length trench coat. The double-breasted piece cinched at the waist with a wide belt and offered a smooth finish as it shined in the evening light.

The “Empire” actress added eye-catching elements to her ensemble with round oversized sunglasses, stud earrings and thin layered necklaces. She swapped her usual sleek bone straight tresses for curly hair, which she held back with a clip.

Campbell completed her look with one of the most unique shoe trends — Balenciaga’s boot pant. The hybrid garment is comprised of skintight leggings with built-in pointy stiletto boots.This fashion/footwear fusion didn’t start with Balenciaga. Nearly a decade ago, shoe designer Tamara Mellon dreamt up a style she called “legging boots,” which she’d pitched during her tenure at Jimmy Choo without success.