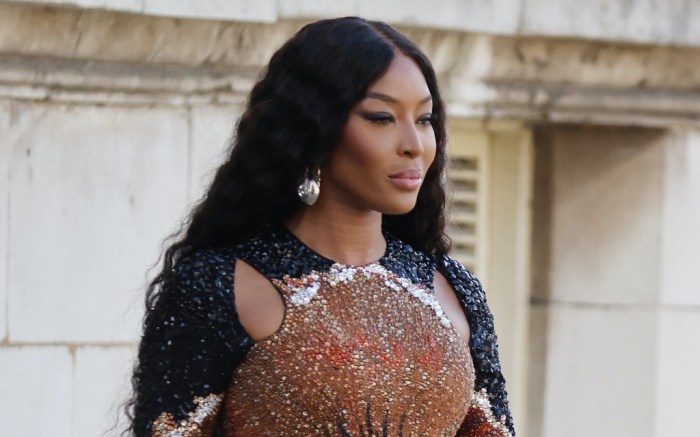 Naomi Campbell brought sparkles to the Alexander McQueen SS23 Womenswear Show today, in London. The supermodel walked the runway in a one-piece crystal-embellished outfit and was photographed wearing the same look as she exit the fashion event.

Campbell’s catsuit featured long sleeves and was completely covered in brown, black, and white sequins with explosive patterns. The outfit featured cutouts on the shoulders as well as the thighs. Shed added large drop earrings to the look and wore her hair down in tight waves.

The garment covered Campbell’s body from shoulders to toes. The piece included built-in boots, which appeared to be pointed-toe heels covered in black sequins with a clear, flat heel. The style is reminiscent of Balenciaga’s popular pantalegging, which everyone from Kim Kardashian to Dua Lipa has been sporting lately. However, the Spanish brand didn’t start the hybrid style. Nearly a decade ago, shoe designer Tamara Mellon dreamt up a style she called “legging boots,” which she’d pitched during her tenure at Jimmy Choo without success.

Campbell has been a global site to see during fashion month events. She has also walked for Salvatore Ferragamo and Tod’s Milan Fashion Week shows. When she’s not hitting the runway, she’s been seen in many front rows and at events as well. To the Chanel show in Paris last week, Campbell wore a black wool trench coat dress and sleek leather boots. Prior to that, she wore a matching pale blue set with a boxy short-sleeve top and matching pants with lace details to Burberry’s London Fashion Week show after party.

PHOTOS: Click through the gallery to see Campbell’s top fashion moments through the years.