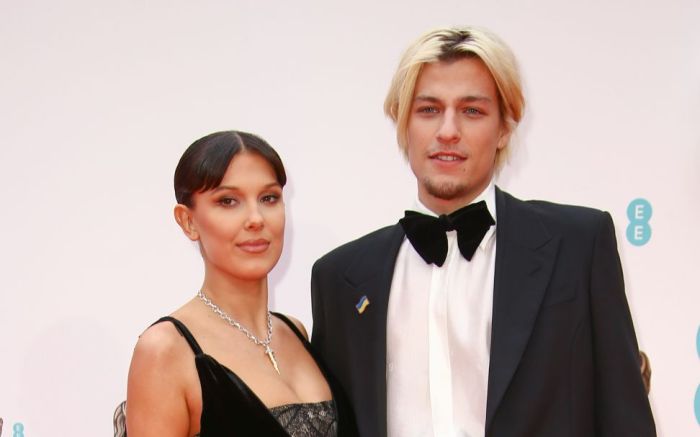 “Stranger Things” actress Millie Bobby Brown arrived on the red carpet at the 2022 BAFTAs today in London in a stunning lacy dress alongside her boyfriend, Jake Bongiovi.

The pair looked dashing, with Brown standing tall in an intricate black gown by Louis Vuitton. The dress appeared to be done in velvet, made better with a long lace skirt that flowed and cascaded down to the carpet. Velvet strips also followed the lace, decorated in glittering tassels, giving the gown some shine. The actress wore a sparkling necklace adorned with a dagger and chain, and upped the drama with black gloves. Brown kept her hair short and slicked down in a short bob and went for a brown smokey eye.

The Converse collaborator kept the drama going with a pair of black platform heels hidden under the lace of her skirt. Her boyfriend opted for a nice dress shoe with a chunky back heel. Both parties looked stunning, dressed perfectly for a night full of glitz and glamour. Brown looked elegant and carried that into her style perfectly, going for a darker, almost punk-inspired look.

The British Academy Film Awards honor the year’s top film performances. Hosted by Rebel Wilson in London’s Royal Albert Hall, the in-person 2022 ceremony kicked off with a “James Bond” theme performance by Shirley Bassey in honor of the franchise’s 60th anniversary. “Dune,” “The Power of the Dog” and “Belfast” are leading the nominations, with stars like Lady Gaga, Benedict Cumberbatch, Will Smith, Ariana DeBose, and Ruth Negga nominated for the event’s top awards.

See more styles on the red carpet at the 2022 BAFTAs.