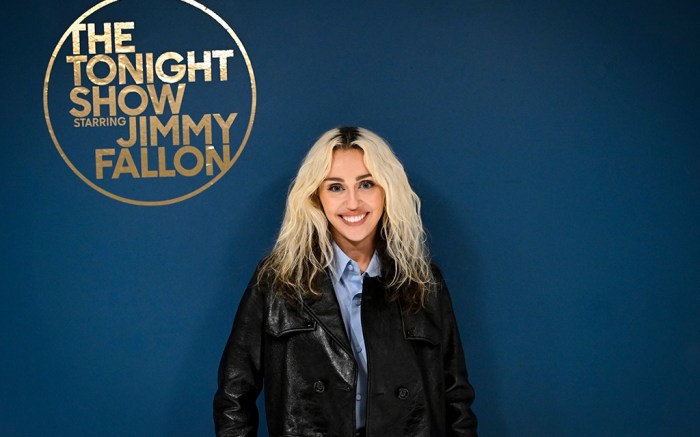 Miley Cyrus sat down for an interview with Jimmy Fallon in an episode that aired yesterday on “The Tonight Show.”

Cyrus was wrapped up in a large black leather coat that acted as a memorable statement-making piece. The bold outerwear was worn over a blue button down that peeked past the collar of her jacket, adding a welcomed pop of color.

As for bottoms, the former Disney Channel star sported shiny black leather trousers with a slouchy, oversized fit. Cyrus wore her blond tresses parted down the middle styled in waves, and accessorized her look with black leather gloves.

When it came to shoes, the “Wrecking Ball” songstress’ outfit was instantly streamlined from a pair of black leather boots. The style featured edgy black uppers with almond-shaped toes and glossy patent leather sheen. The masculine boots were complete with flat soles and short block heels, the pair aligning with Cyrus’ penchant for rebellious styles.

For footwear, Cyrus coordinates most of her pairs to her current musical aesthetic. Since the release of rock album “Plastic Hearts,” the “7 Things” singer has donned a range of platform boots and pumps — often accented with crystals, studs or metallic hues — from labels like Versace, Saint Laurent and Alexandre Vauthier.

She’s also been seen in sleek sandals and mules by Amina Muaddi and Giuseppe Zanotti.

The star has been a longtime fashion industry star since rising to fame in the early 2000s, even collaborating on a line of sneakers with Converse in 2017. Most recently, she’s starred as the face of Gucci’s newest fragrance, Gucci Flora Gorgeous Gardenia.