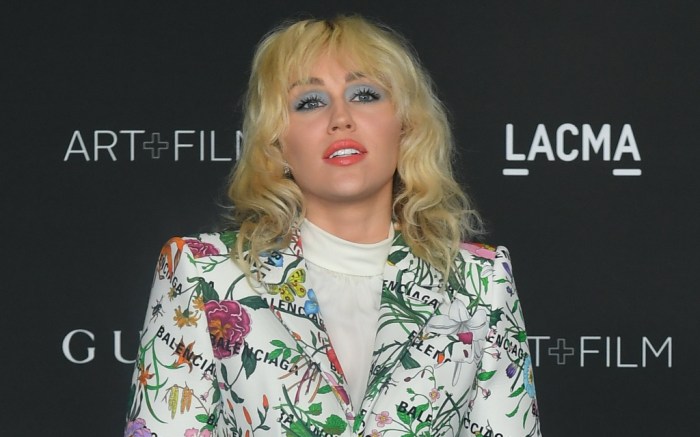 And today on Instagram, the singer put one of her Gucci logomania looks on display. The 29-year-old pop star can be seen performing Madonna’s “Like a Prayer” in a black “GG” jersey jacquard zip-up crop top with a high neck and matching leggings featuring orange accents. While the sportswear-inspired top retails for $2,100, the leggings cost $1,100. Cyrus styled the chic monogrammed set, which is a part of the brand’s Love Parade collection, with a camel-colored coat and a cowboy hat in the same color. The cowgirl-chic style nods Madonna’s early 2000s “Music” album era when she favored western boots and hats.

Last weekend, Cyrus sported a plunging catsuit from the iconic brand for her Lollapalooza Brazil set. The “Where Is My Mind” singer is also the face of Gucci’s Flora Gorgeous Gardenia Eau de Parfum fragrance and appeared in the Italian fashion house’s Love Parade ad campaign. For shoes, she’s been hitting the stage in sturdy black leather boots for stability.

The former Disney Channel darling’s first-ever live album includes new songs like “Attention” and “You” as well as old songs like “We Can’t Stop” and “Wrecking Ball,” plus covers of legendary songs by Dolly Parton, Madonna and Blondie.

Over the years, since her days starring as Hannah Montana, Cyrus has settled into her rocker-chic style and favors wearing edgy outfits on stage.

Flip through the gallery to check out Cyrus’s dramatic style evolution.